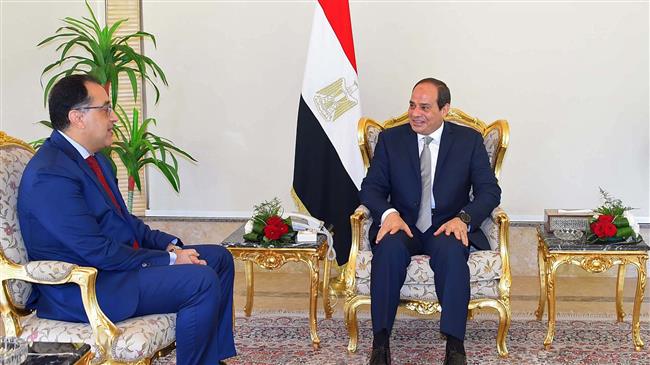 Egyptian President Abdel Fattah el-Sisi has appointed his housing minister as the new prime minister and tasked him with forming a new cabinet in the North African country.

Madbouly, 52, was minister of housing, urban utilities and urban communities in Prime Minister Sherif Ismail’s cabinet. He served as an interim prime minister from November 2017 to the end of January this year, while Ismail received medical treatment abroad.

Ismail submitted the resignation on Tuesday, a move that is in keeping with political tradition that the government should resign at the start of a new presidential term.

Sisi was sworn in on Saturday for a second term in office. A former intelligence chief and defense minister, 63-year-old Sisi started another four years in office, some three months after securing 97 percent of the votes in a nationwide election without serious competition in his run for re-election.

The turnout in the much-criticized election was 41 percent, lower than the 47 percent recorded four years earlier. That could be a potential setback for Sisi who sought to portray the election as a referendum on his efforts to overhaul Egypt’s economy over the past years and root out terrorism in the North African country.

The vote was marred by allegations that real contenders for the election pulled out from the race because of an intimidation campaign by the government. Serious opposition contenders halted their campaigns in January while authorities arrested the main challenger whose campaign manager was also beaten up.

Sisi came to power in 2014, a year after he led the military to oust Egypt’s first competitively-elected president Mohamed Morsi in a coup. He served as the defense minister in Morsi’s government before orchestrating the putsch.

Sisi, who had initially vowed to eliminate terrorism, has failed to fulfill his pledge to this day. Just last November, Daesh-affiliated militants targeted a mosque in Sinai and killed over 300 people — the deadliest attack in Egypt’s recent history.

On the other hand, human rights groups and activists have constantly accused Sisi of violating public freedoms and suppressing opponents. Most of his opponents and vocal members of civil society have also been arrested in the past few months.

Rights groups say the army’s crackdown on Morsi’s supporters has resulted in the deaths of over 1,400 people. About 22,000 others have been arrested, including some 200 people who have been sentenced to death in mass trials.

The incumbent president also triggered intense criticism and controversy at home in April 2016 by handing over the strategic Tiran and Sanafir islands in the Red Sea to Saudi Arabia, in a move interpreted as his government’s submission to the Riyadh regime.

Sisi’s government has further been part of the Saudi-led coalition that has killed some 14,000 Yemeni people since the start of the war three years ago.