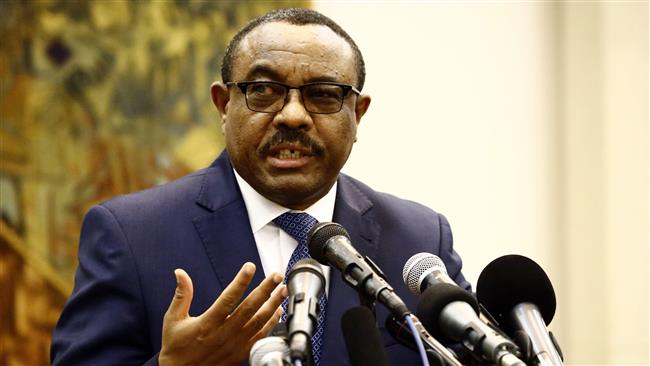 Ethiopia’s Prime Minister Hailemariam Desalegn rejects Egypt’s proposal for the World Bank (WB) to arbitrate in an escalating dispute over a dam Addis Ababa is building over the Nile.

Egypt says the Grand Ethiopian Renaissance Dam, which is more than half way complete, could lower the water flow onto its plains.

With talks in a deadlock, Egyptian Foreign Minister Sameh Shoukry proposed last month that the World Bank intervene in the matter but Desalegn said Sunday “this is not acceptable with our side.”

“Seeking professional support is one thing, transferring (arbitration) to an institution is another thing,” he said.

Desalegn has just returned from a visit to Egypt, where President Abdel Fattah al-Sisi told him he had “extreme concern” over the lack of progress in talks which have been deadlocked for months.

Sisi warned that Egypt’s share of the Nile — which provides nearly all of its freshwater — was a red line. Addis Ababa insists the dam would not be cutting down the flow into Egypt.

Ethiopia aspires to become African’s biggest power exporter, with the $4 billion dam project being central to the plan.

The Grand Ethiopian Renaissance Dam which is now 60 percent complete is about to generate 6,000 megawatts of electricity upon completion.

Sisi has said Egypt had no intention to go to war over the matter, while the Ethiopian premier has said it was “possible to reach agreement … through cooperation and with the spirit of trust”.