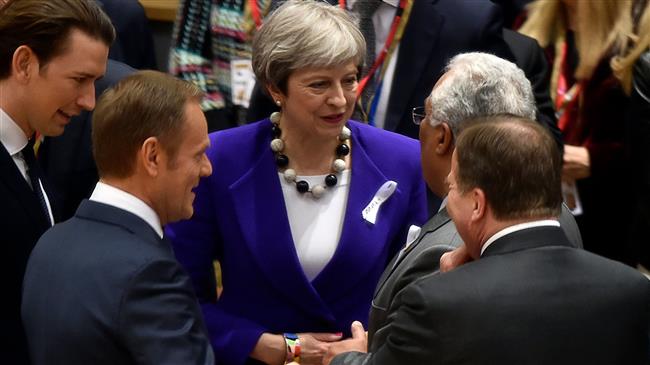 The EU recalls its envoy to Russia over a nerve agent attack on British soil as several members of the bloc consider expelling Russian diplomats.

EU leaders issued a statement in Brussels Thursday, saying it is “highly likely Russia is responsible” for poisoning Soviet-era spy Sergei Skripal and his daughter, Yulia, in a British town earlier this month.

The Skripals were found unconscious on March 4 on a bench in the British city of Salisbury. They remain hospitalized in critical condition.

Britain claims the Soviet-designed Novichok nerve agent has been used to poison the pair and points the finger at Russia.

Moscow has rejected the claims as “absurd”, saying the substance used in the attack could have originated from the countries studying it, including the UK itself.

Dutch Prime Minister Mark Rutte said the EU leaders at the Brussels summit on Thursday agreed to recall the European Union’s ambassador to Moscow for consultations.

AFP quoted an unnamed EU official as saying that “some member states are looking into possibly expelling Russian diplomats or recalling national diplomats.”

The poisoning incident has worsened already tense ties between the EU and Russia.

Britain expelled 23 Russian diplomats in the aftermath of the poisoning incident, and has been pressing its European allies to follow suit.

Lithuania’s President Dalia Grybauskaite said, “All of us we are considering such measures.”

British Prime Minister Theresa May told EU leaders that the poisoning case is part of a “pattern of Russian aggression,” warning that Moscow would pose a “threat” for the “years to come.”

In accusing Russia, the UK however has not presented any evidence. Earlier this week, experts of the Organization for the Prohibition of Chemical Weapons (OPCW) arrived in the UK for a probe into the attack. They say it could take up to three weeks to analyze the samples gathered from the scene.

As the Europeans deliberated, Russia’s Ambassador to Britain Alexander Yakovenko warned that the UK has “bad record of violating international law and misleading the international community.”

History shows that British statements must be verified,” he added, urging a “full transparency of the investigation” as well as cooperation with Moscow and the OPCW experts.

Moscow has repeatedly called on London not jump to conclusions, offering cooperation with London in probing the case.

Russia responded to the UK’s expulsions by expelling exactly the same number of British diplomats, and has vowed it would hit back if London fails to stop its anti-Moscow measures.