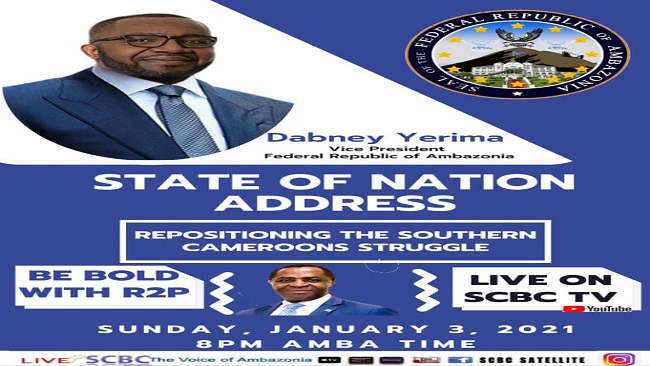 In the boldest repositioning since the start of the Ambazonian revolution, VP Dabney Yerima will be announcing three new policies later this evening. In his address, the exiled leader is expected to call on his people to be bold and adopt the responsibility to protect as a creed to shield their people and nation from the French Cameroun CPDM crime syndicate.

In his speech to the nation, the exiled Ambazonian leader would say “Today January 3, 2021, is two days away from the 3rd anniversary of the abduction of our leader President Julius Ayuk Tabe, and 11 of his associates at the NERA Hotel in Nigeria in a flagrant disregard of international law”. The Ambazonian leader would call on his people to stay focused in the months ahead and trust in the IG’s new course of action.

The Ambazonian Vice President will appeal to all Southern Cameroonians to remain calm in the face of xenophobic attacks sponsored by the regime in Yaoundé. He will say “the December outbreak of xenophobic violence in Fako County sponsored by rogue Chief Monja Monja, is one of the low points of a gloomy year.”

The speech is expected to be watched by an estimated 900,000 and will see the exiled leader rally the nation for a huge advance towards freedom. VP Yerima will also speak of unity observing that “The question in front of our nation during our lifetime is one of independence or extinction” and he will add that “this is a war that if our enemy wins, our subjugation is ensured forever.”

On the issue of the forthcoming African Cup of Nations, the Ambazonian Vice President will be strong and unequivocal with the French Cameroun regime in Yaoundé and the tournament’s organizers.

With the Ambazonian struggle into its fourth year, the exiled leader will call on his country’s diaspora to support his new project aimed at supplying sophisticated equipment to the nation’s self-defence forces. He will say “Let the regime in Yaoundé and France know that we shall pay any price and meet any hardship to succeed. This much, the diaspora must pledge.”

The speech which is rich in content and bold on policy will be delivered live at 8pm Amba Time today 3 January 2021 on SCBC TV, Facebook, YouTube, Android and IOS app and Apple TV. It is expected to be followed by a panel discussion with five of the brightest minds in the Southern Cameroons political story.