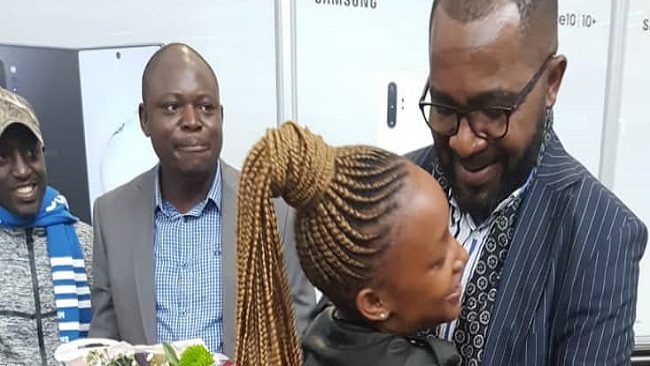 The plane that transported Vice President Dabney Yerima touched down at the Oliver Tambo International Airport in Johannesburg yesterday at 9:45 am and he was welcomed by the newly elected leadership of the Ambazonian community in South Africa.

Upon arrival, the exiled leader held a 7 hour meet the people tour of Johannesburg and Ekuhuleni munipalities in Gutung Province where he met with a cream of Ambazonians professionals and entrepreneurs.

Comrade Yerima was full of praise for the Southern Cameroons community in South Africa for being the vanguard of the revolution. He pointed out that his mission to South Africa was not only to say thank you but to also to remind them of their responsibilities to own and redirect the revolution.

Dabney Yerima appealed to all Southern Cameroonians in South Africa to buy their AmbaFreedomBonds and also fund the revolution through other means. He emphasized that the new dawn Interim Government will not fail because of its new institutional principles of transparency, accountability and responsibility.

The Vice President was also at the Johannesburg Municipality and made stops at Braamfontien,  Turffontein , Hilbrow, Yeovile, and.Bramley.  He concluded the first part of his 10th of Dec 2019 working session by visiting the famous Black and White Ambazonia Cell in Johannesburg.

The climax of the South Africa trip came during a surprise visit to Chief Taka the 4th of Muea-Piyin’s palace.  He was traditionally decorated by Chief Taka the 4th with the title ‘Achefor ‘ (Meaning the closest friend of the Chief).

Dabney Yerima will be travelling today to Mafikeng in the North West province where he will be joined by the renowned Professor Carlson Anyangwe and the Secretary for Communications Milton Taka to speak to top ANC leaders and Ambazonians in a seminar on Decolonization and Justice for Sustainable Peace and Development in Africa at the Municipal Chamber.

By Ayuk Patrick in South Africa