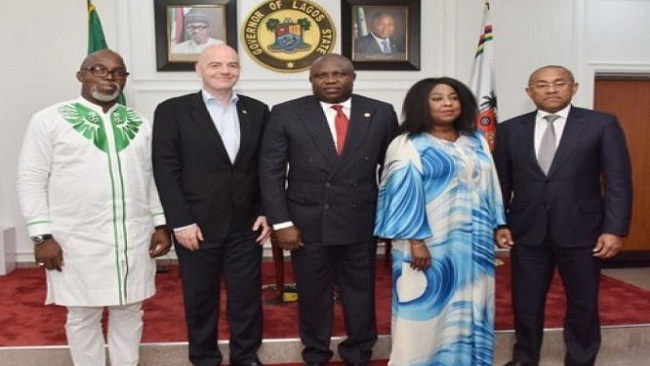 FIFA President Gianni Infantino is in Lagos, Nigeria for a summit of the world football governing body. Infantino arrived in Lagos on Monday and told reporters that the summit is a democratic system where issues concerning football are discussed among stakeholders.

The FIFA FIFA Summit is an initiative of Infantino to give a voice to the member associations, who are in fact FIFA’s bosses, giving them the opportunity to exchange, discuss and listen. These exchanges, according to the FIFA boss, will allow his administration and himself to be able to hear the point of view of the administrations.

Shortly after arriving in Nigeria on Monday, Infantino went to the Lagos government headquarters, along with Nigerian Football Federation (NFF) President Amaju Pinnick. CAF President Ahmad Ahmad and FIFA Secretary General Fatma Samoura who also made the trip to Nigeria.

Among the topics on the agenda for this summit are the future of youth competitions, women’s competition, how to develop them and the player transfer system.