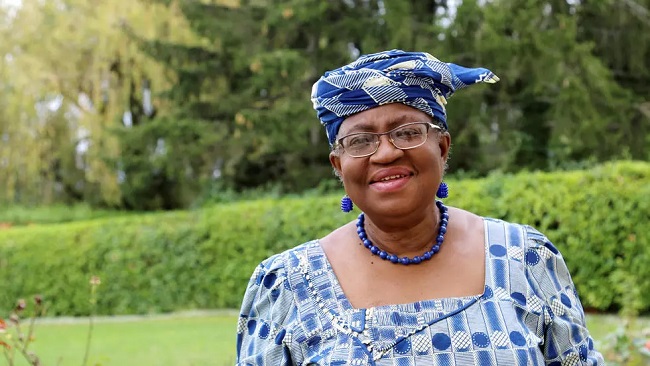 Nigeria’s Ngozi Okonjo-Iweala looks set to be confirmed Monday as the first woman and first African leader of the beleaguered World Trade Organization, a near-paralysed institution desperately needing a kick-start.

The WTO has called a special general council meeting at which the former Nigerian finance minister and World Bank veteran is expected to be formally selected as the global trade body’s new director-general.

US President Joe Biden strongly swung behind her candidacy shortly after the only other remaining contender, South Korean Trade Minister Yoo Myung-hee, pulled out.

“I look forward to finalising the process,” Okonjo-Iweala said on February 6 after securing the Biden administration’s support.

The organisation is also eager to conclude the drawn-out process, having been leaderless since Brazilian career diplomat Roberto Azevedo stepped down last August, a year ahead of schedule.

The process of picking one of eight candidates to succeed him had been expected to wrap up by November, but the administration of former US president Donald Trump blocked the consensus to appoint Okonjo-Iweala.

The 66-year-old will not be at the WTO’s Geneva headquarters for Monday’s virtual session and it is not known when she would take up her duties.

The 164-member organisation’s special session gets under way at 1400 GMT and Okonjo-Iweala is scheduled to hold an online press conference two hours later.

The WTO picks its leaders through consensus-finding, so even though she is the only candidate still in the race — boasting US, EU and African backing — there is always the chance of a spanner being thrown in the works.

She will take over an organisation mired in multiple crises and struggling to help member states navigate the severe global economic slump triggered by the coronavirus pandemic.

Okonjo-Iweala argued during the race that she was best placed out of the eight candidates for the post to steer the WTO through the crises.

“I am a reform candidate,” she insisted.

She has among other things warned that growing protectionism and nationalism have been spurred on by the pandemic and insists barriers need to be lowered to help the world recover.

Even before Covid-19 battered the global economy, the WTO was weighed down by stalled trade talks and struggled to curb trade tensions between the United States and China.

The WTO also faced relentless attacks from Washington under Biden’s predecessor Donald Trump. Among other things, Trump brought the WTO’s dispute settlement appeal system to a grinding halt in late 2019.

Okonjo-Iweala has said her priorities include getting long-blocked trade talks on fishery subsidies across the finish line and breathing life back into WTO’s Appellate Body.

Twice Nigeria’s finance minister (2003-2006 and 2011-2015) and its first female foreign minister in a two-month stint in 2006, Okonjo-Iweala is seen as a trailblazer in her west African homeland.

She has brushed off claims she lacks experience as a trade minister or negotiator, insisting that what is needed to lead the WTO is not technical skills but “boldness, courage”.

She has portrayed herself as a champion against Nigeria’s rampant corruption — saying her own mother was even kidnapped over her attempts to tackle the scourge.

But her critics argue she should have done more to tackle it while in power.

She is on the Twitter board of directors and chaired Gavi, the Vaccine Alliance.