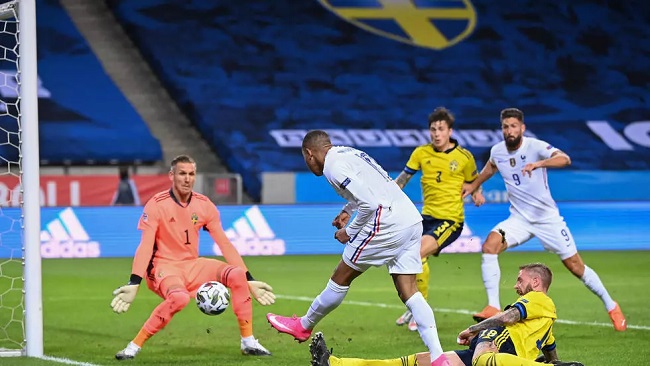 Kylian Mbappe scored with France’s only shot on goal on Saturday in Solna to give the world champions a 1-0 victory over Sweden in the opening round of matches in the Nations League.

Mbappe picked up the ball wide of the goal in the 41st minute, squeezed past two defenders, waited for goalkeeper Robin Olsen to go down and then clipped the ball just inside the post from the narrowest of angles.

The strike was enough to give France victory in a cagey opener in Group 3 of the elite League A in the competition.

Sweden managed just three strikes on target in the 90 minutes, though one of those was a deflection off French defender Dayot Upemecano that Hugo Lloris had to save.

Antoine Griezmann had a chance to double the French lead with the last kick of the game after Anthony Martial was fouled in the box, but the Barcelona attacker blasted the penalty high.

For France’s first match since they beat Albania last November, manager Didier Deschamps recalled Juventus midfielder Adrien Rabiot for his first appearance since he refused to serve as a standby for the 2018 World Cup.

France face Croatia in a rematch of the 2018 World Cup final at the Stade de France in Paris on Tuesday while Sweden take on the fourth team in the group, Portugal, winners of the inaugural Nations League, in Solna.