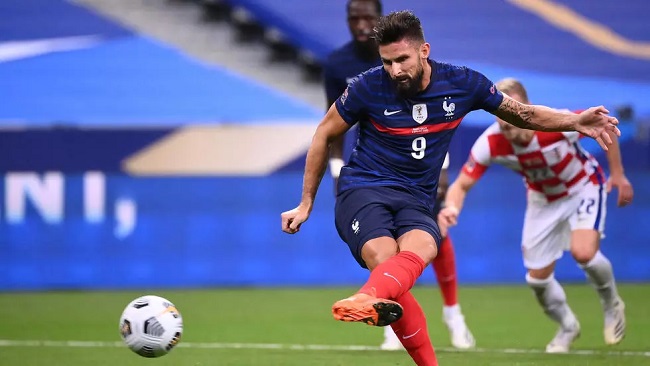 Former France captain and coach Michel Platini defended Olivier Giroud ahead of Wednesday’s friendly with Ukraine, saying the out of favour Chelsea forward “has the quality” to lead the French line.

Giroud, 34, has played just 17 minutes out of Chelsea’s three Premier League games this season with Frank Lampard preferring Tammy Abraham or Timo Werner but is tipped to feature in France coach Didier Deschamps’ starting line-up in spite of criticism for his overly physical style.

“Giroud, if he plays up front it’s because more than anything else he has the quality to play centre-forward,” former UEFA president Platini told AFP.

“And if Deschamps plays him, it’s because he thinks Giroud deserves to play. It doesn’t interest me that he is criticised.

“Deschamps knows how to do his job, he knows what he should do and if he thinks Giroud is the best fit, then he plays him. After all, if Giroud’s criticised, we have all been criticised, even Pele!” Platini added.

Giroud is in line to make his 100th appearance for les Bleus this week and is likely to line up alongside Barcelona’s Antoine Griezmann in a game where the visitors will be without six players who are in self-isolation due to coronavirus cases at their club Shakhtar Donetsk.

Griezmann has scored just 15 times in 51 games since joining the Catalans from Atletico Madrid in July 2019.

Platini said the Barca attacker would benefit from featuring in an attack with a physical presence as was the case at Atletico with Diego Costa.

“I think Griezmann needs a Giroud, a Costa, a guy in front of him,” said Platini.

“Griezmann’s intelligence means that he’s always where the ball lands. You can say the opposite, the ball always lands where he is. It’s the mark of anyone with an instinct for the game.

“However, Giroud is someone who is stronger, bigger, up on the coalface. But Griezmann needs a Giroud,” he added.

Giroud, meanwhile, is closing in slowly on Thierry Henry’s record for France of 51 international goals.

Going into the Ukraine game, he has 40 to his name which is just one shy of Platini who ranks second behind Henry for the national team with 41.

Platini, however, shrugs his shoulders at the likelihood of slipping down that particular ranking.

“It has no form of importance. I’m not an accountant. I’m happy for Giroud, I’m happy for Thierry. I hope there will always be players who score a lot of goals for France,” he said.

“Records are there to be beaten. If Giroud beats my record, I’m happy for France and for him.”