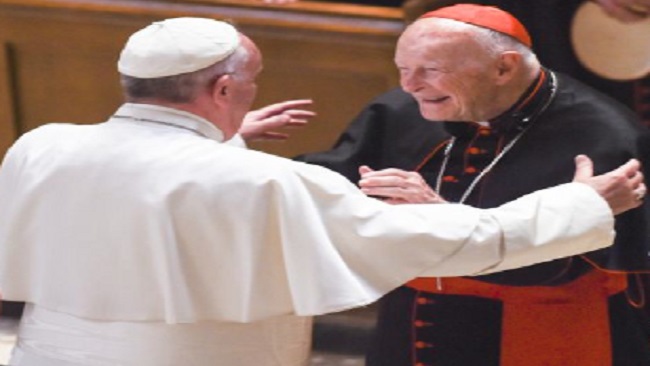 During the night between August 25 and 26, while Pope Francis was resting in Dublin, the newspaper “La Verità” in Italian, “The National Catholic Register” and  “Lifesite News”  in English, and “InfoVaticana” in Spanish published – respectively introduced by Marco Tosatti, Edward Pentin, Diane Montagna, and Gabriel Ariza – the stunning accusation by the former apostolic nuncio in the United States, Carlo Maria Viganò, against those at the highest levels of the Church, starting with the pope himself, who knew for some time about the scandalous homosexual activity of the no-longer-cardinal Theodore McCarrick, but in spite of this did nothing about it.

Viganò was the Holy See’s ambassador in Washington from 2011 to 2016, after having been from 1998 to 2009 a delegate in Rome for the pontifical embassies, with the faculty of overseeing the personal dossiers of candidates for the episcopacy. And he had proof that as of 2000 the Vatican authorities had been informed by the nunciature in the United States of McCarrick’s immoral conduct, without this hindering his promotion as archbishop of Washington and as cardinal.

In 2006, it was Viganò himself who sent the secretary of state at the time, Tarcisio Bertone, a dossier against McCarrick compiled over the previous years by the nuncios in the United States at the time, Gabriel Montalvo and Pietro Sambi. And he did the same in 2008, forwarding to the highest Vatican authorities a report redacted by one of the most assiduous investigators of sexual abuse in the States, Richard Sipe.

In both cases, he received no reply. But when the information reached, by means unknown, Benedict XVI himself, there was an effect. Between 2009 and 2010 McCarrick was subjected – Viganò writes – to the following sanctions:

“The Cardinal was to leave the seminary where he was living, he was forbidden to celebrate [Mass] in public, to participate in public meetings, to give lectures, to travel, with the obligation of dedicating himself to a life of prayer and penance.”

The sanctions were communicated to McCarrick by then-nuncio Sambi. But they were never put into practice, with the full support of the archbishop of Washington, Cardinal Donald Wuerl, who continued to host the reprobate at the seminary of his diocese and to treat him with full honors, only to declare now that he never knew anything about his misconduct.

Then, in 2013, Jorge Mario Bergoglio was elected pope, and on June 23 he received Viganò in audience, after he had become nuncio in the United States. Who today reports as follows the words he said and the pope’s reaction:

“Holy Father, I don’t know if you know Cardinal McCarrick, but if you ask the Congregation for Bishops there is a dossier this thick about him. He corrupted generations of seminarians and priests and Pope Benedict ordered him to withdraw to a life of prayer and penance.’ The Pope did not make the slightest comment about those very grave words of mine and did not show any expression of surprise on his face, as if he had already known the matter for some time, and he immediately changed the subject.”

The fact is that Francis not only did not require McCarrick to submit to the sanctions that had been imposed on him by Benedict XVI, but he kept him close until a few weeks ago as his chief adviser in the key appointments that are reshaping the Catholic hierarchy in the United States, promoting his proteges. “It was only when he was forced by the report of the abuse of a minor,”  Viganò writes, “that he took action [regarding McCarrick].”

But in the judgment of the former nuncio in the United States, for Pope Francis the case could not be seen as closed. Viganò writes at the culminating point of his indictment:

“Francis is abdicating the mandate which Christ gave to Peter to confirm the brethren. Indeed, by his action he has divided them, led them into error, and encouraged the wolves to continue to tear apart the sheep of Christ’s flock. In this extremely dramatic moment for the universal Church, he must acknowledge his mistakes and, in keeping with the proclaimed principle of zero tolerance, Pope Francis must be the first to set a good example for cardinals and bishops who covered up McCarrick’s abuses and resign along with all of them.”

Viganò’s “Testimony” is highly substantiated and charges other important cardinals, from Pietro Parolin to Sean Patrick O’Mallet to Óscar Andrés Rodríguez Maradiaga. It is absolutely a must-read, in its entirety.