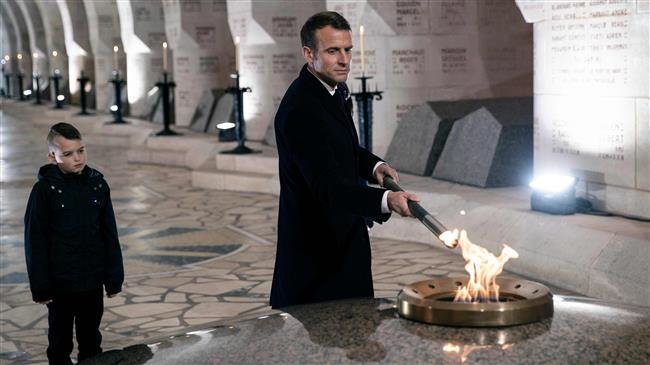 French domestic intelligence forces have arrested six people linked to ultra-right movements in the country on suspicion of planning a “violent” attack against President Emmanuel Macron.

One female and five male suspects, with ages ranging from 22 to 62, were taken into custody by the agents of France’s DGSI intelligence bureau, which did not identify the detainees, AFP reported Tuesday, citing sources close to the case.

According to the report, four of the suspects were arrested in the northeastern city of Moselle, within a close distance of the city of Verdun, where Macron was on a visit on Tuesday as part of week-long memorial festivities marking the end of World War I.

The other two suspects were seized in southeast and western France.

One source said the investigation of the case — by the Paris Prosecutor’s Office, which handles terrorism inquires — is dealing with “a vague and ill-defined project at this stage.”

The plot was not the first known attempt on the life of the French president. A 23-year-old man was charged in July 2017 with plotting to assassinate Macron at France’s Bastille Day military parade. Three kitchen knives were found in that suspect’s automobile, and analysis of his computer found that he had carried out internet searches as part of his scheme.

Several other suspected far-right members have been arrested since 2017 — the year Macron was elected president — after police found they might be preparing imminent attacks.

Ten more people were also taken into custody in October 2017 over suspicions of aiming to target Muslims as well as politicians such as France’s far-left politicians Jean-Luc Melenchon and Christophe Castaner, who now serves as the country’s interior minister.

Castaner had warned on Monday that the nation remained “on alert” over what he referred to as threats posed by “extremist networks both on the right and left, which are quite active in our country.”

Macron himself warned of the threat from far-right movements across Europe in an interview earlier this week, saying complacency during the 1930s was what opened the way for the rise of Nazi leader Adolf Hitler in Germany and fascist leader Benito Mussolini in Italy.