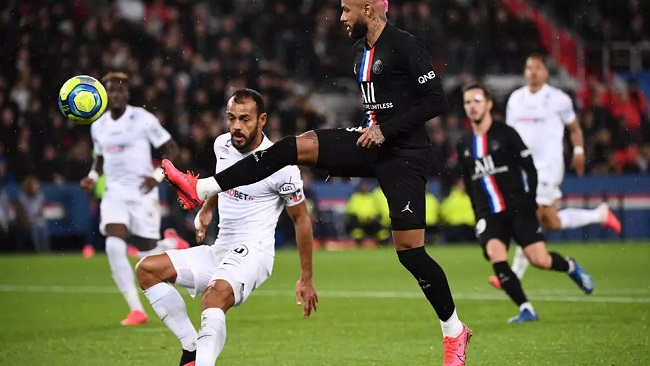 Neymar shook off an injury scare and raged with the match officials while helping Paris Saint-Germain romp to a 5-0 win over Montpellier that stretched their lead at the top of Ligue 1 on Saturday.

Pablo Sarabia, Angel Di Maria, Kylian Mbappe and Layvin Kurzawa all scored along with a Daniel Congre own goal, with the outcome never in doubt after Montpellier goalkeeper Dimitry Bertaud was sent off early on.

Montpellier finished the game with nine men, and the result means PSG start February by making it 19 games unbeaten and are now 13 points ahead of nearest rivals Marseille.

But it was Neymar, his hair dyed shocking pink for the occasion, who predictably caught the eye.

The Brazilian warmed up with a shirt bearing the name of Kobe Bryant and the number 24 of the basketball star who was killed in a helicopter crash last weekend. PSG also held a minute’s applause for Bryant ahead of kick-off.

Neymar didn’t score, having to settle just for one assist, but he produced his usual tricks, provoked the opposition, and required lengthy treatment at the end of the first half after appearing to hurt his ribs as he grappled for the ball with Montpellier’s Arnaud Souquet.

Unhappy with the some of the treatment reserved for him, Neymar was then caught by television cameras angrily remonstrating in Portuguese with the fourth official in the tunnel at half-time.

Despite the knock, the world’s most expensive player — who on Sunday is set to host a lavish party for his 28th birthday at a Parisian nightclub — lasted the 90 minutes.

– Cavani back on bench –

PSG coach Thomas Tuchel had opted to leave Mauro Icardi on the bench at kick-off alongside Edinson Cavani, who remains in the French capital after a January move to Atletico Madrid never materialised.

Instead Sarabia started with Mbappe up front, and the former Real Madrid player pounced on a loose ball to curl home a fine opener from 22 yards in the eighth minute for his 10th goal of the season.

Andy Delort then missed a chance to equalise for Montpellier, and their hopes of getting back into the game were as good as over when Bertaud was sent off in the 17th minute.

Only playing because usual first choice Geronimo Rulli was suspended, Bertaud raced out of his box to stop Mbappe bearing down on goal, only to block the ball with his arm and receive a straight red.

On came young debutant Matis Carvalho in goal for the visitors and he had to pick the ball out of his net twice before the interval.

Di Maria exchanged passes with Sarabia before lifting the ball over Carvalho to make it 2-0 in the 41st minute, and shortly afterwards Teji Savanier’s attempt to clear a Di Maria corner rebounded off the face of defender Congre and in.

After Neymar had cooled down at the break, he set up Mbappe for one shot that hit the outside of the post, and then played in the France World Cup winner to round Carvalho and score his 14th league goal of the season.

Kurzawa drilled in the fifth in the 65th minute, and Cavani came on before having a late header disallowed for offside. By that point the visitors were playing with nine men after substitute Joris Chotard saw two quick yellow cards.

Marseille go to Bordeaux on Sunday looking for a first win there in 43 years, while Rennes strengthened their grip on third by scoring twice in injury time to claim a 3-2 win over local rivals Nantes on Friday.