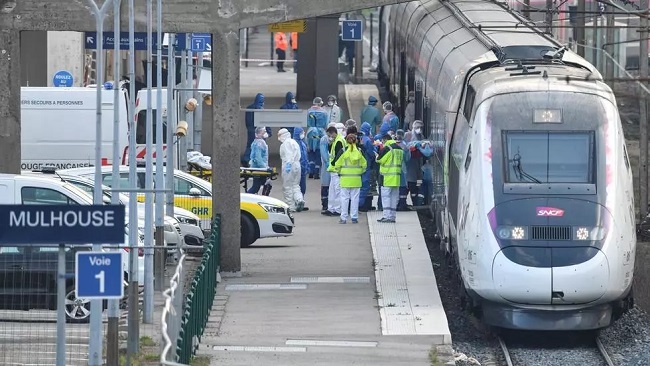 France staged its largest evacuation of coronavirus patients to date from hospitals in the hard-hit east on Sunday, increasing efforts to free up intensive care units as officials warned of an influx of serious cases in the coming days.

Two specially equipped high-speed trains carried 36 patients from Mulhouse and Nancy to hospitals along France’s western coast, where the outbreak has been limited so far.

Dozens of hospital workers, flanked by police and soldiers standing guard, spent hours installing four patients in each wagon in an operation that began before dawn.

“We have to free up beds, it’s absolutely crucial…. We’re still seeing an increase in patient numbers,” said Francois Brun, head of emergency services at the regional hospital in nearby Metz.

The evacuations came as Germany sent a military plane for the first time to Strasbourg to transport two patients to a hospital in Ulm.

France has been evacuating dozens from the east over the past week, hoping to stay ahead of a crisis that Prime Minister Edouard Philippe has warned will only worsen over the next fortnight.

Overall, more than 4,600 coronavirus patients are in intensive care in France, many with severe respiratory problems requiring ventilators that officials worry could soon be in short supply.

Philippe said at the weekend the government was racing to have 14,000 intensive care beds available soon, compared with just 5,000 before the outbreak began in January.

On Sunday the national health service reported 292 new coronavirus deaths in the past 24 hours, bringing the total to 2,606.

The daily toll was below the 319 deaths reported on Saturday, but the figures include only deaths reported in hospitals, and not at retirement homes or assisted-living facilities.

Also Sunday the housing ministry announced it would commandeer 5,000 hotel beds to house homeless people during the crisis.

Officials fear the virus may spread quickly at the country’s roughly 7,000 retirement homes, and several have already announced dozens of deaths.

Those figures will start to be reported this week, the prime minister said on Sunday, warning that “the battle is only starting.”

“This war will probably be won on the basis of intensive care beds, and our ability to strategically use all our intensive care resources on the national level,” said Marie-Odile Saillard, director of the Metz regional hospital.

“This is the most important number to keep track of because it reflects the strength of the epidemic,” he said at his daily briefing.

The government has ordered a billion face masks, mainly from China, but warned that surging worldwide demand for protective equipment means they might not arrive soon enough for medical workers currently facing shortages.

A plane from China carrying 5.5 million masks and other equipment arrived in Paris on Sunday, though the government has admitted it needs 40 million masks each week for health workers alone as the outbreak rages.

“Our first Boeing 777 Cargo has just landed at #ParisCDG with close to 100 tonnes of medical equipment on board, including more than 5 million masks,” Air France tweeted.

France has been on lockdown since March 17 in a bid to limit the contagion, a situation it has extended until at least April 15.