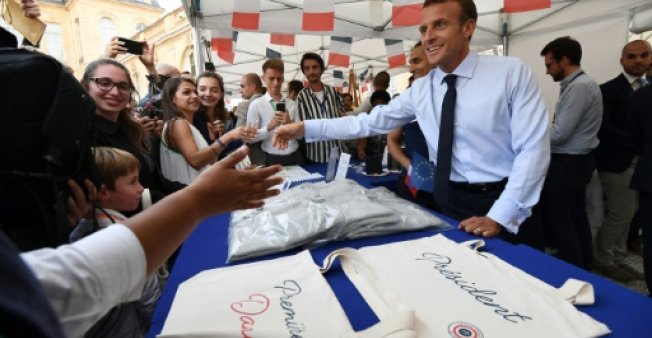 French President Emmanuel Macron has sparked criticism over comments to an unemployed man deemed insensitive. But is it really possible, as he claimed, to find a job in a Parisian restaurant just by crossing the street?

Welcoming the public to the presidential palace on Saturday as part of an open-doors event, Macron got talking to a 25-year-old who said he was having no luck finding work as a gardener. “I send resumes and cover letters, they don’t lead to anything,” he told Macron, in a clip that quickly went viral.

Macron advised him to head to the bustling Montparnasse neighbourhood of Paris, saying he could find a job as a waiter in the blink of an eye. “If you’re willing and motivated, in hotels, cafes and restaurants, construction, there’s not a single place I go where they don’t say they’re looking for people,” he said.

“If I crossed the street I’d find you one.” The exchange ended with a handshake, but provided instant ammunition for leftist critics of Macron, a former investment banker, accusing him of being patronising and out of touch with ordinary people.

The Liberation daily went so far as to draw a comparison with the supposed suggestion by France’s last queen, Marie-Antoinette, that if the poor had no bread they should eat cake instead.

After several previous headline-grabbing encounters with members of the public, including telling off a teenager for not calling him “Mr President”, the paper advised Macron to stop “lecturing everyone”.

Elected in May 2017 on a promise to reinvigorate a sluggish economy, unemployment has yet to budge much under Macron’s pro-business policies. He is keen to encourage people to move between sectors to bring joblessness down from its current rate of 9.1 percent.

But Liberation accused Macron of “a purely technocratic vision under which if there are vacant jobs all you need to do is stick job-seekers in them, regardless of their training, their situation, or what they want to do with their lives.

“Blaming (job-seekers for their unemployment) in the style of Marie-Antoinette, that’s what is weighing this presidency down,” it concluded.

Yet some have sprung to Macron’s defence over his advice to the gardener, pointing out that France does indeed have a surplus of low-skilled jobs in the construction and restaurant industries.

Industry officials say there are up to 100,000 hotel and restaurant jobs that need filling in France, and have even called on Macron to grant legal status to more illegal immigrants to help cover the shortage.

Montparnasse, a commercial district whose bistrots were once favoured hangouts for the likes of Ernest Hemingway, is indeed packed with restaurants.

Many of their managers say they are chronically short-staffed, suffering high turnover due to high pressure and unsociable hours.

“We sometimes have to refuse customers or groups because we don’t have enough workers,” said the maitre d’ at La Rotonde, the upmarket restaurant where Macron celebrated winning the first round of the presidential election. Declining to give his name, he added however that the restaurant was selective in its hiring.

“We’re looking for serious people. They have to want to work,” he said. Jose Vicente, a waiter at the nearby Kibaloma cafe, said “absolutely”, restaurant jobs were available, although contrary to Macron’s words “you can’t just cross the road to find one”.

“Not everyone is cut out for it,” said Vicente, who has been waiting tables for 30 years. Those who turn up looking for work are usually aspiring dish-washers — mostly immigrants who “don’t have qualifications and don’t speak French properly”, Vicente said.

The latest controversy comes as Macron’s ratings have slumped, weighed down by a scandal over a former bodyguard and with economic growth set to come in at a lower-than-expected 1.6 percent this year. A Kantar Sofres Onepoint poll released Monday found only 19 percent had a positive view of the president.