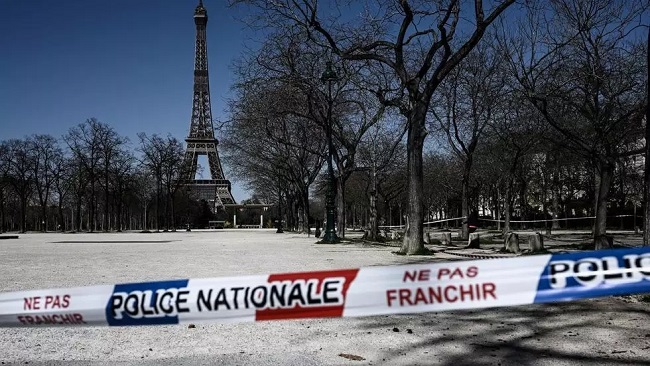 France on Tuesday reported a daily coronavirus death toll rise of 240, taking the total number of fatalities from the outbreak to 1,100, according to health officials. The increase makes France the fifth country to cross the 1,000 death toll mark since the epidemic originated in China late last year.

France now has 22,300 confirmed coronavirus cases, including an increase of 2,444 in the past 24 hours, said the country’s Director General of Health, Jerome Salomon, at a press briefing Tuesday.

Across the country, 10,176 people were hospitalised for coronavirus, including 2,516 in a serious condition, said Salomon.

The spike in coronavirus cases and deaths came after the country’s scientific council, which advises French President Emmanuel Macron on the coronavirus crisis, said a lockdown to contain the epidemic should last a total of six weeks since it was put in place.

France has been under a strict lockdown since March 17, when Macron announced restrictive measures, including fines for people violating the rules. The lockdown was initially expected to last 15 days.

In its statement, France’s scientific council said the lockdown was at present the only really efficient strategy.

The council also said it was “necessary to strengthen” the containment measures without providing details.

Responding to the council’s lockdown recommendations, French Health Minister Olivier Véran said it was not possible to put a clear time frame just yet. “The members of the scientific council aren’t able to say with precision if the confinement should be for such a set duration. They said, may be we need to prepare for the confinement to last longer. Beyond 15 days we know, but perhaps it could extend past that – another five or six weeks,” he said. “It will only end when the epidemic curve allows it, this is the basic principle. Confinement has a purpose, to protect the French people. It will last as long as it has to last.”

Noting that three weeks were needed to obtain an initial estimate of the impact of the lockdown, the council said, “Containment is currently the only truly operational strategy, as the alternative policy of large-scale screenings and isolation of those detected is not currently feasible on a national scale.”

A decision to end the lockdown “could be taken on the basis of epidemiological indicators. in particular the saturation of hospital services and especially of intensive care units”. The government will also have to ensure that the elements of a post-confinement strategy are operational, the council added.

Members of the council also issued an “alert” on “the real or perceived shortage of various types of equipment, starting with essential health protection equipment”.

They recommended that the government “should provide full transparency and clarity” to answer questions from hospitals and health care providers about existing stocks and how services will be supplied.