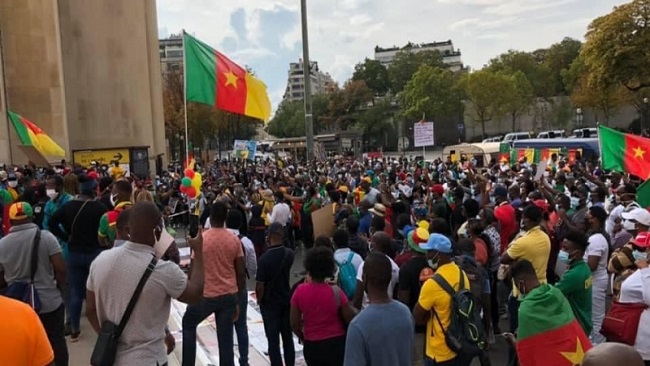 Francophone Crisis: Massive Anti-Biya Outpouring in Europe, Canada and the US 0

Hundreds of French speaking Cameroonians in the diaspora have responded to calls from the main opposition leader Prof Maurice Kamto to express their rejection of the 87 year old President Biya.

Huge demonstrations were staged yesterday Saturday 19 September 2020, in Europe and America calling for the resignation of the National Chairman of the ruling CPDM crime syndicate.

The largest of all the demonstrations was recorded in the French capital of Paris and led by Wilfried Claude Ekanga of the MRC party.

Similar atmosphere was also witnessed on the streets of Milan (Italy), Berlin (Germany), Washington DC and Ottawa in Canada where French Cameroonians displayed banners calling on their Head of State to step down.

These rallies are being held under the direct supervision of Maurice Kamto who recently urged French speaking Cameroonians to take to the streets to put an end to the Biya Francophone Beti Ewondo regime that has been in power for 38 years.

The German and the US embassies in Yaoundé have both painted Tuesday the 22nd as high-risk day, since the authorities have already threatened to call on the security forces to prevent the said gatherings.