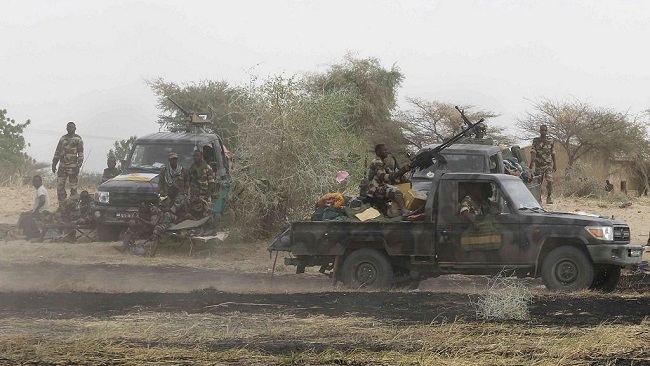 French Cameroun: 2 soldiers killed in Boko Haram attack on military base in Toufou 0

The French Cameroun army reportedly came under attacked late on Sunday by elements of the Nigerian Islamic sect, Boko Haram in Toufou in the Mayo-Tsanaga Division in the Far North Region. Cameroon Concord News learnt from security sources that two soldiers were killed and their weapons taken away.

Our source revealed that the Boko Haram fighters targeted the military post at Toufou and destroyed the dilapidated building.

The last skirmishes between the French Cameroun army and the Islamist group were several months ago, but the Sunday incident demonstrated that the group seems to have regained confidence and is now ready more than ever before to confront the French Cameroonian soldiers.

According to a statement transmitted by Commander Cyrille Serge Atonfack Guemo spokesman of the Cameroon government army, soldiers loyal to the regime in Yaoundé had the upper hand during the attack and five Boko Haram fighters were killed.

However, a military source who sued for anonymity said the fighting lasted several hours before the French Cameroun army managed to repel the attackers. In the end, two Cameroonian soldiers were killed.