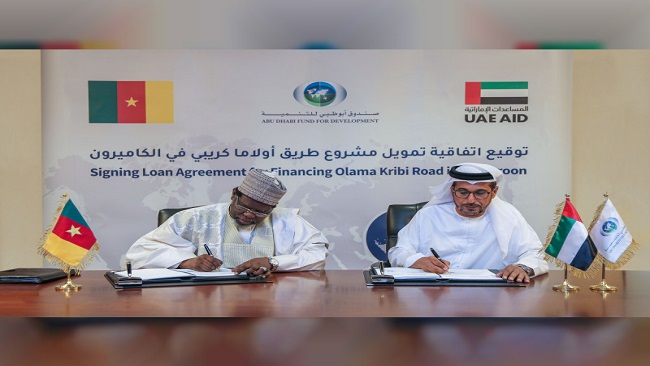 French Cameroun: Abu Dhabi Fund for Development announces a concessionary loan worth US$15 million for the Olama-Kribi Road project 0

The Abu Dhabi Fund for Development, ADFD, has announced the approval of a concessionary loan worth AED55 million (US$15 million) for the Olama-Kribi Road project in Cameroon.

In a statement, the Fund said that the 204-kilometre road will link the capital Yaoundé to Kribi – one of the largest seaports in the country. “Aimed at enhancing the country’s transportation sector, the strategic project will go a long way in stimulating Cameroon’s economy, facilitating trade exchange, as well as easing the movement of people, vehicles, and goods,” ADFD added.

Mohammed Saif Al Suwaidi, ADFD Director-General, and Iya Tidjani, Ambassador of the Cameroon to Saudi Arabia, signed the loan agreement outlining the terms of the funding at ADFD’s headquarters in Abu Dhabi.

Commenting on the concessionary loan agreement, Al Suwaidi said, “ADFD is proud to work as a strategic partner with the governments of beneficiary countries to help achieve their development objectives with a focus on financing projects that improve infrastructure and drive sustainable economic growth.”

“The Fund believes that the development of the transportation sector increases nationwide and cross-country trade. We are delighted to collaborate with the Cameroonian government for the first time and continue to support global efforts to implement the United Nations’ Sustainable Development Goals, SDGs, on the African continent,” he added.

For his part, Iya Tidjani praised the strong fraternal ties between the UAE and Cameroon across all fields, as well as the UAE’s global aid endeavours, noting ADFD’s development activities worldwide.

Explaining the importance of the Olama-Kribi strategic road project, the Ambassador thanked ADFD for its crucial support in advancing the implementation of objectives outlined in the Cameroon Vision 2035 and contribution to one of the priority infrastructure projects.

Since its inception in 1971, ADFD has funded development projects in 95 countries, including 40 African nations, to the tune of AED92 billion through concessionary loans, government grants, and investments. The Fund’s total expenditure in Africa amounts to an estimated AED23 billion. ADFD has also invested in eight companies and two private equity funds to boost a variety of sectors on the African continent.