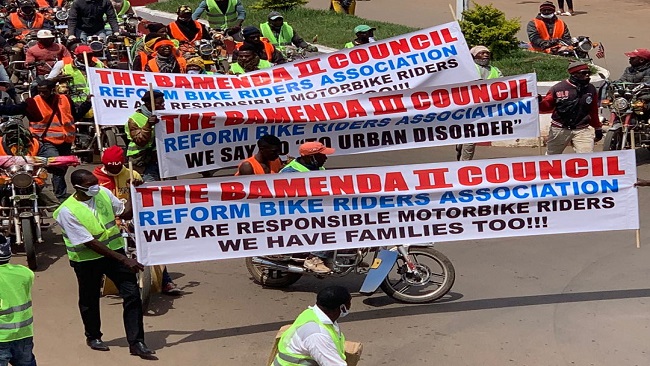 A political group from Yaoundé and a sea of French Cameroun army soldiers posing as bike riders heavily funded by French Cameroun’s Minister of Territorial Administration, Paul Atanga Nji have organized a raucous rally in Bamenda, the chief city in the Northern Zone of Southern Cameroons-Ambazonia calling on the occupying Biya regime to reform bike laws in the Mezam County. The participants did wear protective masks not as an anti COVID-19 gesture but to hide their identities from Ambazonia Restoration Forces. The Atanga Nji militia men did not observe social distancing recommendations.

Cameroon Intelligence Report gathered from a well-placed source in Yaoundé that the protest was organized and funded by the French Cameroun Minister of Territorial Administration with many of the participants transported to Bamenda from French Cameroun’s West Region.

Despite Mezam County having the highest number of French Cameroun military operations in recent times, along with nearly 98 deaths in Bafut, French Cameroun surrogate, Minister Paul Atanga Nji reportedly fighting for his political survival sponsored the Bamenda demonstration to give the impression that the Mezam County was now under the control of the Francophone dominated army.

One of the participants who spoke to our correspondent claimed Minister Atanga Nji did not sponsor the demonstration but that it was financed from Yaoundé.

The Ambazonia Vice President Dabney Yerima is expected to chair a town hall meeting in the coming days to redirect the Southern Cameroons struggle to self defense.