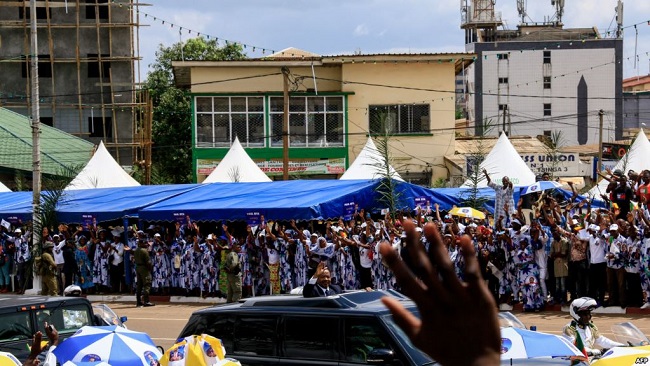 Cameroon’s president on Tuesday warned Anglophone separatists to lay down their arms or face the full force of the law, a day after dozens of schoolchildren were abducted in the rebel region.

Clashes between a secessionist movement and the army began more than a year ago in west Cameroon, killing over 400 civilians and forcing thousands to flee their homes.

On Monday, unidentified assailants kidnapped 79 children, their principal and a driver from the PSS Nkwen school in Bamenda in Northwest region and took them into the bush outside town, military and government sources said.

An army spokesman blamed separatists for Monday’s kidnapping. A separatist spokesman denied involvement and said government soldiers had carried it out, as a ploy to discredit the insurgents.

President Paul Biya, making an inauguration speech after re-election last month that extends his 36-year-old rule, did not mention the kidnapping but attacked the separatists.

‘Rigor of the law’

“They need to know that they will face the rigor of the law and the determination of our defense and security forces,” Biya said in the national assembly. “I appeal to them to lay down their arms.”

Last week, an American Baptist missionary was shot dead amid fighting between the army and separatists in Bamenda.

The secessionists have imposed curfews and closed schools as part of their rebellion against the French-speaking government, which they say has marginalized the Anglophone minority.

Samuel Fonki, a minister of the Presbyterian Church in Cameroon, said he had been mediating with the kidnappers for the children’s release. He said separatists were responsible.

The search for the children continued Tuesday. About 200 parents gathered outside the school, waiting to hear if their children were among those who had been abducted or had remained unharmed at the school.

Authorities denied parents access to the school, according to six parents and a security guard who spoke to Reuters.

The kidnapping was a chilling echo of the 2014 abduction of the Chibok girls by Boko Haram in neighboring Nigeria. There are no known links between the Cameroon separatists and the Nigerian Islamist militant group.