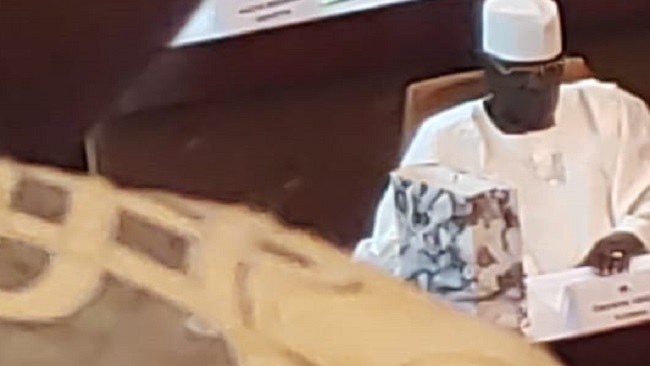 The Speaker of the National Assembly, Cavaye Yeguie Djibril has not been diagnosed with coronavirus. But needed to have been self-isolating at home in Yaoundé upon his return from France-a country that recently confirmed its coronavirus outbreak is “very worrying” and “deteriorating very fast”.

Supported by two men, the 80 year old speaker of the National Assembly, the Right Honourable Cavaye Yeguie Djibril arrived Yaoundé from his sick bed in France in a bid to keep his job and was seen today participating during deliberations in the Lower House alongside other members of parliament.

Visibly in very bad shape, Cavaye Yeguie Djibril’s body is now a colony of diseases and there are fears he might just be Cameroon’s 6th coronavirus case.

Cameroon’s Ministry of Health said in a statement that “We have just registered a 5th confirmed case in Yaoundé. He is a person returning from France. Like the others, he was immediately taken care of.” The development came hours after House Speaker Cavaye Djibril returned to Cameroon also from France.

The number of coronavirus cases in France where Cavaye Djibril spent the last two months doubled every three days and there were French citizens who were sick and who were in intensive care with the Francophone politician and that number runs into hundreds.

According to the latest official figures published on Sunday, France has had 127 coronavirus deaths and 5,423 confirmed cases.

That was a jump of 36 deaths and over 900 cases in 24 hours. More than 400 people have been hospitalised in a serious condition.

There is a real worry that the speed of the outbreak could saturate hospitals in France and this is something we absolutely want to avoid in Cameroon. This is also why Cavaye Djibril should have been told to remain at home.