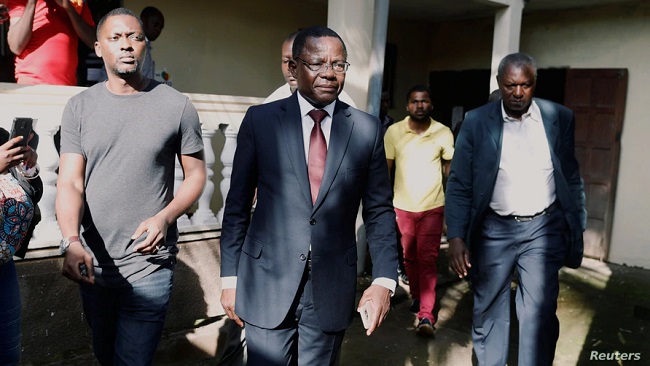 Witnesses say Cameroon police have chased and beaten at least 200 opposition supporters outside the home of opposition leader Maurice Kamto, who has been under de facto house arrest for over a month.  Anti-riot police were deployed to Kamto’s home this week to contain crowds of supporters demanding he be released.  Police blocked Kamto from leaving his house after he organized anti-government protests in September.

An unknown female supporter of opposition leader Maurice Kamto stripped off her clothes in front of his house Thursday and shouted at the large police presence that his month-long detention was illegal.

The woman, in her early 50s, screamed that she would not leave until police allowed Kamto out of his house to speak with her.

She was one of over 200 opposition supporters gathered outside Kamto’s house to mark one month since police surrounded his home, placing him under de facto house arrest.

Kamto supporter Giselle Malongo says she came from the western town of Bafoussam to ask why Kamto has been stopped from leaving his house since September 22.

She told VOA the police violently brutalized and blocked supporters from meeting Kamto, a man she called “their president.”  Malongo said armed police seized mobile phones from supporters who tried to take photographs (of the clashes).  She said police also prevented them from delivering food donations to Kamto and his family.

A reporter also witnessed police beating and blocking Kamto’s supporters, some of whom were trying to donate food.

Christopher Ndong,  secretary general and legal advisor of Kamto’s Cameroon Renaissance Movement party, said police beat 13 supporters so badly that they had to get treated at a hospital.

“Kamto was very furious at this gesture by the military refusing people to come and give him food aid after he had been locked up for a month,” Ndong told VOA.  “There were a lot of hot exchanges.  We decry the attitude of government and its military operatives.  We are saying in fact, this is an infringement to democratic principles and democratic rights.”

Cameroon police gave no official statement on the clashes and would not answer a reporter’s questions.

Authorities have not officially declared Kamto to be under house arrest, but police have not allowed him to leave his home since he organized nationwide anti-government protests in September.

Cameroon Territorial Administration Minister Paul Atanga Nji said police are watching Kamto because he is being investigated for hostilities against the state.

“I want to sound a stern warning to unscrupulous politicians that they will face the law.  It must be clear that the discontinuance of legal proceedings does not imply that the charges have been dropped.  Any further act of public disorder will take them back to square one,” Nji said.

Biya has been in power for 38 years, making him one of Africa’s longest-serving leaders.

Kamto and about 200 supporters were jailed last year for protesting against the 2018 presidential election results, which named Biya the winner.

Since then, Cameroon police have closely monitored his activities and all of his political rallies and protests have been declared illegal.