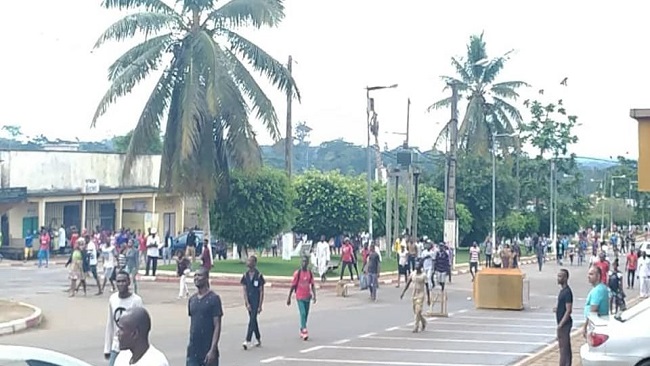 Sangmélima is one of the four constituencies of the South region from which the Cameroonian dictator hails.

The installation of Faustin Bekono, newly elected mayor of the commune of Sangmélima, initially scheduled for February 28, will finally take place on March 3, Cameroon Concord News has gathered from CPDM sources in French Cameroun.

The newly elected mayor will replace André Noel Essiane, a long time acolyte of President Biya who has been under Beti Ewondo media scrutiny of late.

The inhabitants of Sangmelima were informed of the delay in the handing over ceremony via a message from the governor of the South region, Felix Nguelé Nguelé in which he instructed the senior divisional officer for Dja et Lobo to postpone the administrative ritual “until further notice.”

A lot of tongues have been waging on the matter due to the fact that the decision to postpone the installation ceremony was not sanctioned by the Southern Cameroons Minister of Territorial Administration, Paul Atanga Nji but by the Director of the Civil Cabinet at the Presidency of the Republic.

Our Yaoundé city reporter revealed that it was the Director of the Civil Cabinet at the Presidency, Samuel Mvondo Ayolo who pressurized the governor and the Senior Divisional Officer for Dja-et-Lobo, Koulbout Aman David to suspend the process.

A recent government communiqué made public late last week and signed by the prefect of Dja et Lobo stated that, on “instructions from the very high hierarchy“, the elected mayor will be installed on March 3.  The “very high hierarchy” in French Cameroun political discourse refers to the head of state.

According to local media reports, the crisis in Sangmelima is one of the many political wars that the Biya regime’s dignitaries are waging against each other.