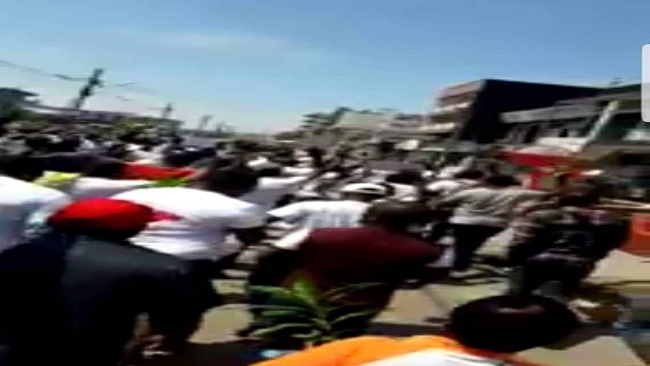 Police and gendarmes in Cameroon used tear gas and water cannon to disperse protesters calling for an end to President Paul Biya’s near 40-year rule in the commercial hub of Douala on Tuesday, Reuters witnesses said.

The protest was called by Biya’s rival Maurice Kamto of the Cameroon Renaissance Movement party, who hopes to spark a popular revolt, the likes of which have been seen in other African nations such as Mali and Burkina Faso.

Security forces have in recent days packed the streets of Cameroon’s largest cities, including the capital Yaounde, in anticipation of the planned demonstrations, raising concerns among residents of a return to the kind of violent crackdowns that have met protests in recent years.

Hundreds of people gathered in the busy Ndokoti commercial district of Douala on Tuesday morning chanting “Biya must go!”. Police, camped out in trucks at major intersections, chased some of the protesters across the neighbourhood and into their houses, the witnesses said.

Biya is also under pressure from young political activists in urban centres who want change, and say the 87-year-old has stolen elections and is the mastermind of a series of deadly backlashes against those who oppose him. The Cameroon government denies those charges.

Biya won a 2018 election that his closest rival Kamto said was fraudulent. Kamto was jailed for nine months in 2019 on insurrection charges following a protest. He was later pardoned, but his arrest galvanised the opposition and has led to sporadic protests ever since.