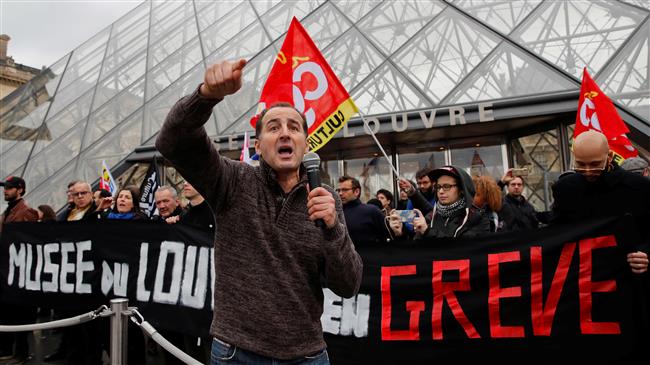 French police have evacuated President Emmanuel Macron from a theater in Paris after some protesters managed to enter the building, while many more were trying to enter.

Protesters chanting “Macron, resign” gathered outside the Les Bouffes du Nord theatre on Friday evening, after people shared on social media that the president was at the venue.

They were trying to enter the venue but the president was rushed out of the building, reportedly in a black car.

On the other side of capital, protesters blocked the entrance to the Louvre museum and forced the building to close Friday.

The museum’s Leonardo da Vinci exhibit, which was marking the 500th anniversary of the Italian master’s death, was also closed.

The incident occurred on the 44th day of strikes, which started in early December, against Macron‘s plan to overhaul the pension system that would see workers retiring later or facing reduced payouts.

This was the first time since then that the Louvre and its Leonardo exhibit were fully shut down.

The weeks of protests and strikes have affected public transportation, disrupted schools, hospitals, courthouses and even opera houses and the Eiffel tower.

This is while unions have called for a seventh round of street rallies next Friday, when the pension plan is due to be presented to the Cabinet.

The government of Macron has already ruled out any possibility of abandoning the plan.

The president is already faced with a major challenge to his rule from the “Yellow Vest” protesters, who have been holding weekly demonstrations for more than a year.

According to a poll, published on Thursday, almost two- thirds of French people ‘don’t trust’ Macron.

The survey, conducted by Elabe for the Les Echos newspaper and Radio Classique, indicated that 63 percent of respondents “don’t trust” the president, down two points in one month.

His government intends to present the pension reform bill on Friday so that it can be debated in parliament starting in mid February, with the aim of passing a law before the summer break.