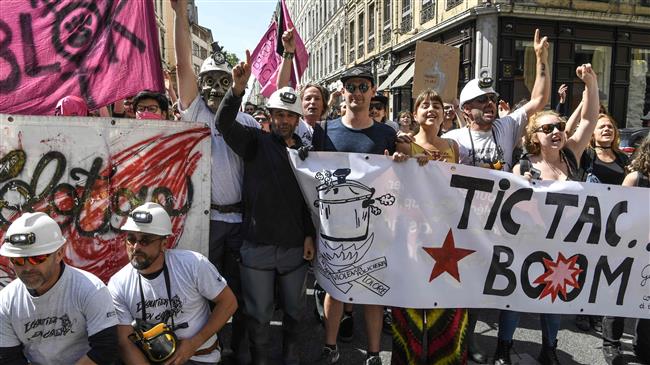 Public services workers across France have staged a fresh round of strike to protest government plans to reform labor laws, which entails cutting tens of thousands of jobs in the upcoming years.

Unions called civil servants in various sectors to stop work on Tuesday and join street protests planned in about 140 cities, towns and villages across France.

The nationwide walkout is a third under President Emmanuel Macron since he took office last year on pledges of reforming the labor laws.

More than 300,000 people took to the streets in a previous march called by the unions in March.

Civil servants, hospital staff, postal workers, air traffic controllers, state teachers and public administration workers were expected to join the strike, which is aimed at persuading Macron to revise his policies for a drastic reduction in public spending and overhaul of the labor laws.

The workers are specifically angry at Macron’s plans to cut 120,000 government administration posts by 2022. They also want the government to scrap a proposal to end certain sick leave perks and plans for replacing the job-for-life recruitment with contract hiring system in the civil service.

Macron, 40, has shown little signs he may surrender to demands of the workers. His administration has held rounds of talks with union leaders and insists it will legislate on the labor reforms next year.

The nationwide strikes come amid a continued industrial action in France’s railway sector. Workers have stopped working several days a week since early April to protest plans for ending SNCF train company’s monopoly. Rail workers unions are also angry at planned use of contracts for hiring staff that they say are more protective than other sectors.