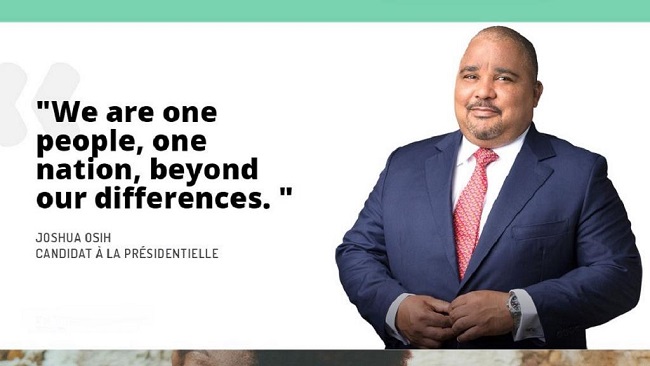 The main opposition party candidate in Cameroon’s October scheduled elections on Monday said, President Paul Biya is ‘‘the only one responsible’‘ for the conflict in the English-speaking regions of the country.

Joshua Osih, is himself a native of the North and Southwest regions in Cameroon, which have been plagued by a political crisis since 2016.

By the end of 2017, the crisis degenerated into a conflict between armed forces and English-speaking separatists, killing dozens, including at least 80 soldiers and police. 200,000 people were also forced to flee their homes.

“We have a problem with the system and this system has meant that we do not have simple political solutions to simple problems. We have a president who does not understand what is happening in Cameroon, who spends most of his time abroad and who thinks that sending the army as he did in the 1960s with the UPC can solve this problem. He can’t, Osih said.

The shadow of this conflict hangs over the organization of the October 7 presidential election in the English-speaking zone, in which Osih and seven other candidates will face 85-year old Paul Biya.

This is the first time he’s running on the ticket of the Social Democratic Front, the main opposition party that was previously represented by its historic leader, John Fru Ndi.

Unlike other candidates, Osih says he is “against” a probe into charges of alleged abuses committed by the army in English-speaking areas, saying he believes, “there is a political responsibility that is far superior to the responsibility of mere military “.