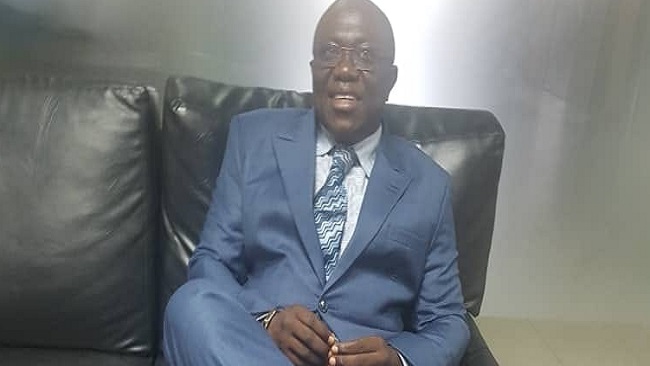 Dr. Joachim Arrey, a Canada-based writer, journalist, political analyst and translator, has been one of the many people around the world who have been calling for dialogue as a means to address the Southern Cameroons crisis. A native of the Southwest region of Cameroon, Dr. Arrey holds that genuine and sustainable solutions to the destructive crisis can only be found at the negotiating table.  While in the UK recently, he took time off his tight schedule to visit the Cameroon Concord News Group’s (CCNG) global headquarters where he spoke with Group Chairman, Soter Tarh Agbaw-Ebai, on the goings-on in Cameroon. It was a pleasure chatting with him. Read…

Dr Arrey: I have been following what is happening in our part of the country very closely. Things are not looking great out there. Our people are dying and it beats my imagination that we have not yet understood that all wars find their solutions at the negotiating table. There is no price for who can kill more people. Both parties must understand this. Let’s not let our emotions drive us to ridiculous extents. I have been urging both parties to head to the negotiating table and I still stand by that. The government has to find a way to bring these killings to an end. We are losing our human resources and this will come back to bite us some day. The financial resources we are using to buy arms could be diverted to real development projects that can create jobs for our youths. We have to be strategic in our thinking and we must learn from the mistakes of other people.

Cameroon Concord News: But the Yaounde government is not listening to any calls for an inclusive dialogue. What do you expect the oppressed people of Southern Cameroons to do?

Dr Arrey: Self-defense is a legitimate right of every citizen recognized under international law, but this does not imply that we cannot talk peace around a negotiating table during war time. A lot of atrocities have already been committed and I feel really bad that a small protest by teachers and lawyers has been allowed to spill out of proportion.  The gory images coming out of Southern Cameroons tell me that there are huge war crimes being committed by both sides. What both parties must understand is that at the end of the fighting, all these atrocities will be investigated and those who will be found guilty of gross human rights violations and war crimes will have to pay the price. I would like to use this opportunity to call on the government of Cameroon to reconsider some of its decisions. The truth is that military action will not give it the fast solution it needs. Southern Cameroonians have expressed genuine grievances and I think it is only proper for the government to listen to calls for an inclusive dialogue that will help to lay this matter to rest. The world has evolved and the days when military brutality was considered a weapon of choice to address national issues have long gone. We have to be in and of this world and this requires us to adopt approaches that other civilized nations have used to deal with their minorities.

Cameroon Concord News: You have always talked of federalism and you always point out that Canada holds an effective solution to our problem. Can you explain this to our readers?

Dr Arrey: Thanks for granting me the opportunity to discuss this particular point with your readers. I have always held that a well-structured federal system will spare Cameroon the type of crisis it is going through at this moment. The world has changed and the people want to take ownership of their own issues. They want to take control of their lives and this can only happen if a federal system is brought to our country. The current crisis in Southern Cameroons is a direct consequence of the over-centralization that has taken place over the last five decades. The development and management of any country in the world is always a work in progress and for that work to progress by leaps and bounds, there must be dialogue at all times. Cameroonian leaders must stop thinking that the top-bottom approach that has worked in the past will work in modern times. If we have to avoid situations like the current one that is tearing the country apart, we must adopt new and innovative approaches that will guarantee us peace and progress. No country develops when there are perceptions of injustice, nepotism, discrimination and marginalization.

This therefore brings me to the role Canada can play to help us out of this pretty mess. I have profound respect for the Canadian political system. It is a federal system that has brought peace to this great nation that has been the envy of the world for decades. It is a country that does not talk, but it acts. Its federal system grants the provinces autonomy over certain issues that could result in conflicts if not well managed. Let us not forget that Canada also has a minority – a French-speaking minority – Quebec – that has a totally different culture from the rest of the country.

The federal government has yielded a lot of ground to this province so as to bring peace to the country. The bright and praise-worthy management of the country by past and present Canadian prime ministers like Lester B. Pearson, Pierre Elliot Trudeau, Brian Mulroney, Jean Chretien, Paul Martin, Stephen Harper and Justin Trudeau has helped to put Canada in the spotlight for all the right reasons. Cameroon should seek to find out how Canada pulled this off to the extent that it has become one of the best countries in the world to raise a family. The country’s bilingual nature should advise our leaders that we could have something in common with Canada. It never hurts to borrow from those who have posted great results.

Cameroon Concord News: You sound so informed and experienced. Will you be ready to go back home to give a helping hand if called upon, especially regarding the Southern Cameroons crisis?

Dr Arrey:  I am already preparing my retirement and I have made up my mind to return to Cameroon, especially to my native Ossing where I believe I have a lot to offer. I don’t need to be called up by anybody for me to return to Cameroon. There is a lot to be done out there and I think I will be more than happy to serve the people of my small city and division. I have a lot of experience in many areas and I am willing to share that experience with anybody who seeks to have a share of it. It is just but normal for me to give back to my people who were there for me during my hour of need.

I also have my father’s cocoa and coffee plantations to take care of. Those are the plantations that helped to give me the education that has taken me to all the nooks and crannies of the world. As for writing and politics, these two elements run in my blood. I will always be there to write in order to inform Cameroonians and to analyze political situations for many people to gain a better understanding of what is happening in their country. That is what nature wants me to do and that is one of the many things I will be doing upon retirement.

Cameroon Concord News: Still on politics, I understand it runs in the family. I have been reliably advised that your daughter who lives in Canada is already in politics. Is that true?

Dr Arrey: My daughter has chosen a different path in life. At the tender age of 14 she told me she wanted to be in politics and that she wanted to fight for immigrants after having noticed my own frustrations in life. I cannot but admire and appreciate her for understanding my pain. She immediately joined the Liberal party of Canada where she has been making her modest contribution. She has been participating in elections in Canada, not as a candidate, but a worker for her party. She is still in university and she must achieve all her academic dreams before becoming an active political player. I cannot but wish her the best and will always give her my entire support whenever she needs it.

Cameroon Concord News: What do you make of the political drama that is playing out in the nation’s capital at this time?

Dr Arrey: Cameroon is really going through a tough moment in its history. Boko Haram is still an active threat in the north, Southern Cameroons is still boiling and seeing what is almost bursting out of the ground in Yaounde gives me goose bumps. I sincerely hope that the truth will prevail. I really want the people’s choice to be respected so that we can have peace. If the authorities do not respect the will of the people, they should be ready to deal with the consequences. I have always said that Cameroon is a ticking time bomb and that if care is not taken, it could blow up one day and this will mean killing lots of people and destabilizing the entire sub-region. I want peace to prevail, but seeing what is already happening in Yaounde, I know we are in for tough times.

Professor Kamto has already declared that the people have given him a mandate which he must defend at all cost and that already sounds like he is preparing for a big fight. This, he says, is based on the results his party has. The government and the ruling party are struggling to prove that he is wrong and they are saying that only the constitutional council has the right to announce election results. I am on the sidelines and waiting for the official announcement. I only hope it will come to help Cameroonians live in peace. If things go the other way, then our country will have to deal with a huge crisis. I pray for the best for my beloved country. I just want my fellow Cameroonians to live in peace. This will surely require a change in the way the government has been running the show.

Cameroon Concord News: Thank you, Dr. Arrey, for sharing your perspective with us. We hope you will find more time to visit us in the days and months ahead.

Dr. Arrey: The pleasure is mine. You have been doing a great job and I hope I will continue to read your inspiring and informative editorials.