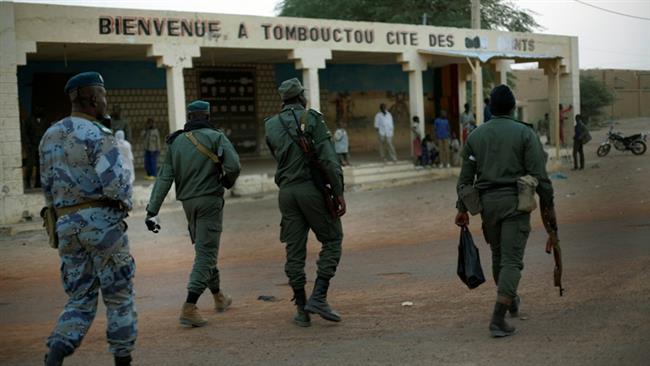 At least 14 soldiers have been killed and 17 others sustained injuries in the central Mali city of Timbuktu after unknown gunmen attacked their camp, according to military sources.

Unidentified armed men attacked the camp in the town of Soumpi at around 6 a.m. (0600 GMT) on Saturday.

“The provisional toll is 14 dead, 17 wounded and two enemies killed. The search is still on for those missing,” said one of the military sources, who spoke on condition of anonymity.

Another military source confirmed the attack, putting the death toll at “around 15.”

“The soldiers abandoned their position. The enemy carried away material,” the unnamed source said.

The attack came two days after 26 civilians were killed and several others injured when their vehicle was blown up by a mine in central Mali.

According to Malian army spokesman Colonel Diarran Kone, the vehicle had crossed the volatile border with neighboring Burkina Faso, where militants loyal to the Daesh Takfiri terrorist group are known to operate, when it ran over the mine.

In a separate incident, the Malian military said its forces had come under attack in the town of Youwarou near Mopti, once a popular tourist spot, but that they had repelled it.

“They neutralized seven terrorists and recovered equipment abandoned by the assailants,” it said.

In the past three years, Takfiri forces, which had long been destabilizing the thinly populated desert north of Mali, have swept south into its wetter, more populated central regions, exploiting local conflicts to spread militancy.

Mali plunged into turmoil after President Amadou Toumani Toure was overthrown in a military coup on March 22, 2012.

The coup leaders said they staged the putsch in response to the government’s inability to contain the rebellion in the country’s north.

In January 2013, French soldiers were deployed to Mali under the pretext of putting an end to the crisis in the West African country, a former colony of France.

Unrest rages on across Mali despite the presence there of an 11,000-strong UN peacekeeping force, which has been stationed in the country since July 2013, as well as 1,000 French forces.