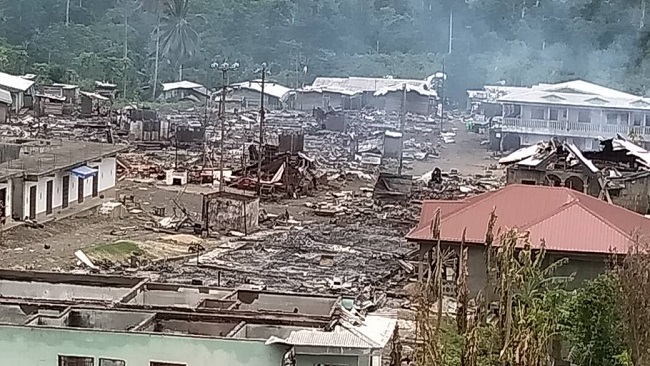 Some of the thousands of people who fled the volatile English-speaking regions of Cameroon before the Oct. 7 presidential election have returned home to find that their houses and villages have been burned to the ground.

Separatists pushing for an English-speaking state had vowed to prevent any voting in northwestern and southwestern Cameroon, and they attacked many polling places on election day.

Christa Banla, 18, fled her village of Ngarum for a town in a French-speaking area. After incumbent President Paul Biya was declared winner of the election, she decided to go back to her village, thinking that peace had been restored.

Instead, she found her home had been torched. The military had attacked the village and other areas where they believed armed separatists were hiding or holding training camps.

“They came and drove all of us out of the compound,” Banla said. “We were only coming back in the evening to discover that the compound was destroyed by the military and burned down. We do not even have food to eat, no clothes to wear. We need help.”

Emmanuel Chuye, mayor of Ndu district, which includes Ngarum, said that after the election, the government ordered the military to attack suspected separatist strongholds. He said many people were being killed and their houses were being burned down by both the military and the separatists.

“The government has been attacking the ones fighting for the restoration of the independence of southern Cameroon,” Chuye said. “In Ngarum, a lieutenant was killed as well as two military officials; civilians were killed, including a [municipal] councilor. They were not only killed, they were burned and their houses, too, were set ablaze.”

The government has not given casualty figures from the recent fighting, but local media reported that at least 30 civilians, soldiers and suspected separatists had been killed in the northwest within a week.

Northwest Region Gov. Deben Tchoffo confirmed that the military was at work in the region, but said soldiers were not killing indiscriminately and burning villages. He said the attacks would continue until peace returned to the region.

“Government has taken necessary measures to secure the remotest areas, neglecting nothing that can hinder the global security of the nation,” Tchoffo said.

Unrest began in Cameroon in November 2016, when English-speaking teachers and lawyers demonstrated against the dominant use of the French language. Separatists took over and demanded that the English-speaking northwest and southwest secede from the rest of the country.

The United Nations has said that at least 400 people have been killed and hundreds of thousands have fled their homes as a result of the conflict. At least 20,000 have fled to Nigeria.