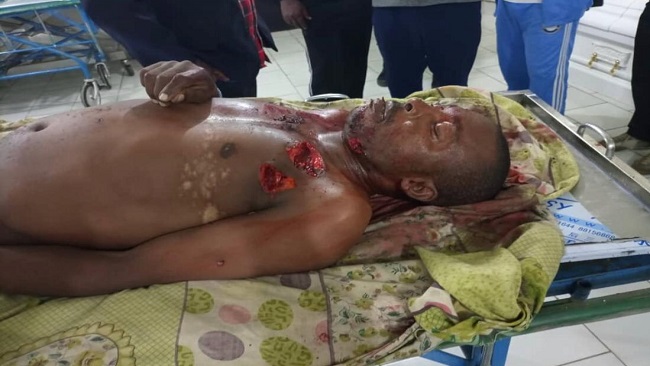 Hundreds of villagers have deserted a village in Cameroon’s English-speaking Southwest region after rebels attacked, killed their chief and torched his palace Friday evening. The fleeing civilians are asking for help in neighboring towns. The incident took place a day after another English-speaking chief was abducted. His whereabouts are still unknown.

He says villagers were attending a meeting with their traditional ruler when heavily armed men attacked and started shooting in the air. He says the armed men set the palace buildings on fire, but the villagers were able to escape safely. He says many villagers who escaped to the neighboring town of Buea have nowhere to stay?

“This is another affront to the sacredness of human life, to the solemnity of traditional institutions and to the sorrow of a people who are still mourning their children who were wickedly slain in Kumba on October 24. I am disturbed by this news and hereby convey my deepest sympathy to the people of Liwu La-Malale. I condemn in the strongest terms this act of wickedness for one other life lost is one too many,” he said.

Cameroon’s government has confirmed the killing and blamed separatist fighters. No one has claimed responsibility.

Bernard Okalia Bilai, governor of the Southwest region called for calm and said the military has been deployed to secure the area and find the killers. He asked the fleeing civilians to return.

In September, Cameroon territorial administration minister Paul Atanga Nji held a series of meetings and asked chiefs who fled separatist conflicts to return to their palaces.

Atem Ebako, chief of the English-speaking southwestern village of Talangaye says the attack on a chief and the burning of his palace will scare traditional rulers from returning to their villages to participate in the December 6 regional election as requested by the government.

“The minister made it abundantly clear to us that it would not be properly seen that the regional council elections that are coming for which the real actors are chiefs, that such an event is taking place and the chiefs are outside. That the government is going to put up a package to accompany the chiefs back to their palaces and we are still expecting that to happen,” he said.

Chiefs suspected of collaborating with the central government in Yaoundé to fight the rebels have been victims of attacks from suspected rebels since the conflict worsened in 2017.

At least 11 village chiefs have been killed and 17 abducted and released since then. Hundreds escaped to safer localities and began returning to their palaces in September when the government assured them of their safety.

Last month, some of the chiefs started creating armed militias for protection against separatists for the first time.

The government asked militias created by chiefs to collaborate with government troops by informing the military of any strange movements or visitors in their villages, but separatist groups on social media promised to kill chiefs who create militias. The separatists said any chief who collaborates with the central government in Yaoundé will not find peace should they return home.

On November 5, Sehm Mbinglo, traditional ruler of the Nso people who was returning to his palace after two years of absence was abducted. Catholic cardinal Tumi, who was accompanying Mbinglo, was also abducted but later released. Mbinglo’s whereabouts are unknown.

The rebels have been fighting to create an independent, English-speaking state in Cameroon’s western regions since 2017.   At least 3,000 people have been killed and 550,000 displaced, according to the United Nations.