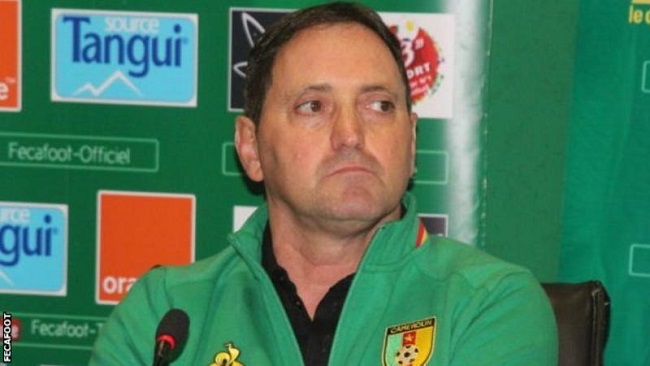 Cameroon manager Antonio Conceicao aims to see the Indomitable Lions reach the final of the 2022 Africa Cup of Nations which they will host for the second time in their history.

The tournament was scheduled to take place between January and February 2021 but due to the coronavirus pandemic, it had to be pushed forward to 2022.

Cameroon have automatically qualified by virtue of being hosts and Conceicao – who took over the job of the national team on September 2019 after Dutch legend Clarence Seedorf was sacked, wants to reclaim the title they had won in 2017.

“We have automatically qualified as the organising country. We are taking advantage of this qualifying phase and these friendly matches to manage to collect as much information as possible about the players we are calling in terms of personalities and sports skills,” Conceicao told FootMercato.

“That’s why we’re changing six to seven players per roster, to see as many as possible. The goal is to bring together the best possible group for the competition with the objective of reaching the Afcon final, because we will play at home. Our responsibility is great.

“We know what the hosting and its success represent for the Cameroonian people. From that moment on, we must be well prepared to take up this challenge, because the demand is great, the responsibility just as much.”

There a number of French-born players of Cameroonian descent plying their trade in Ligue 1. Conceicao reveals contact has been made with players who are interested in switching international allegiance.

“We have other players playing in France on our radar,” Conceicao continued. “I cannot say any names, but we have already contacted young people aged 20-21 who play with the youth teams in France and have Cameroonian origins, to find out if they are available to come and defend the colours of Cameroon.

“Some are thinking, some have said no. We must be attentive to the breeding grounds in France and England, which may represent the future of Cameroonian football. We will see if we are lucky in this endeavour.”