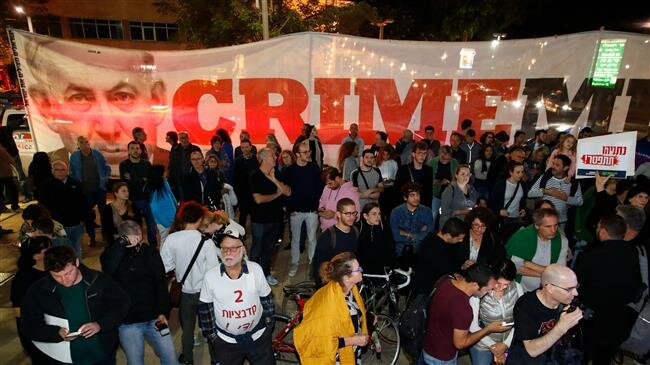 At least 6,000 people were at the gathering in the Habima Square of Tel Aviv, Israel’s Channel 12 estimated.

Netanyahu is “the most cowardly prime minister we’ve ever had,” a demonstrator told Yedioth Ahronoth (Ynet), adding that the premier “needs to resign and go plead his case in court.”

Israel is “sick of the corruption”, another protester said. “We need to send Bibi home,” she said.

A same rally had been held last Saturday in Tel Aviv, where hundreds of demonstrators urged Netanyahu to leave office.

“What you see here is absurd. We have a man who is charged with three major crimes. And he still believes he wants to be [a] prime minister. I mean this is crazy,” a protester said.

Netanyahu’s political opponents and demonstrators have moved to capitalize on the indictment on charges relating to corruption, bribery and breach of trust against him, hoping to strip the weakened 70-year-old leader of power.

Last Saturday, Benny Gantz, the leader of center-left Blue and White political alliance and Netanyahu’s main challenger in the two elections this year, called on the Israeli premier to step down, but still offered to form a coalition administration with his Likud political party if there are any chances.

“In light of the circumstances, I call to form a unity administration that is as broad as possible under my leadership,” Gantz said at a press conference in Tel Aviv.

An opinion poll recently revealed that more than half of people in the occupied territories believe that Netanyahu must quit after being indicted on a series of corruption charges.

According to the survey conducted by Channel 13 and published last Friday evening, 56% said the charges leveled against Netanyahu were too much for him to continue as the Israeli leader, while 35% said he needed not step down and the remaining 9% of the respondents said they didn’t know.

Netanyahu and his wife, Sara, are suspected of wrongfully accepting $264,000 worth of jewelry, cigars, champagne and other gifts from wealthy businessmen for political favors in one case.

The Israeli prime minister is also accused of interfering with regulatory bodies and lawmakers on behalf of the biggest selling newspaper in the occupied territories, Ynet, in exchange for positive news coverage and favorable stories about him.

Israeli lawmakers have less than a month to organize a coalition and select a lawmaker to lead a majority administration. There are strong indications that the legislators will not succeed.

Israel will have to hold elections for the third time this year in case Knesset members fail to garner 61 seats in the 120-seat legislature.