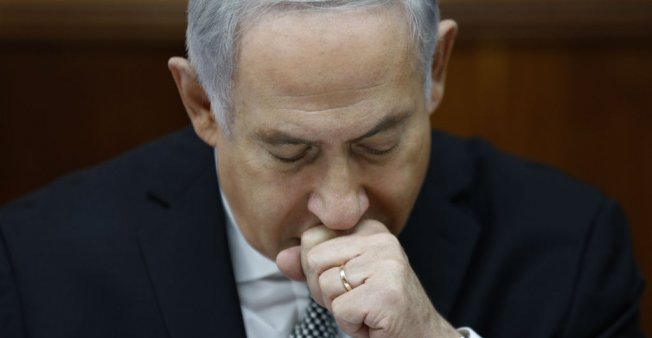 Israeli police arrived on Friday at Prime Minister Benjamin Netanyahu’s home where media reports said they were to question him for an eighth time over allegations of fraud and bribery.

An AFP journalist saw detectives arriving at Netanyahu’s official Jerusalem residence in two vehicles at around 9 am (0700 GMT). Police issued no official confirmation that questioning was under way. Investigators were at the same time to take a statement from his wife Sara at national fraud squad headquarters near Tel Aviv, media said.
A former Netanyahu aide and a top businessman are both in custody, linked to allegations of suspected fraud by the premier.
Nir Hefetz, a former media adviser to the Netanyahu family, and Shaul Elovitch, the controlling shareholder of telecoms group Bezeq, were among seven suspects arrested last week as fraud suspicions against Netanyahu snowballed.

Police suspect Elovitch was given business concessions in return for Netanyahu receiving good press on Walla!, a news website he owns. Hefetz is alleged to have acted as a messenger between Netanyahu and Bezeq and Walla! bosses.

He is also suspected of trying to bribe a retired judge to block a probe into the prime minister’s wife, Sara Netanyahu, over alleged misuse of public funds.

Police have now questioned the premier eight times since the beginning of 2017, and last month said there was sufficient evidence to charge him for graft, fraud and breach of trust in two other cases.

In one, he and family members are suspected of receiving one million shekels ($285,000, 230,000 euros) of luxury cigars, champagne and jewellery from wealthy personalities in exchange for financial or personal favours.

In the other case, investigators suspect the premier of trying to reach an agreement with the owner of Yediot Aharonot, a top Israeli daily newspaper, for more favourable coverage.

Israeli media said police would question him on the Bezeq affair for the first time on Friday and would also take from him a statement as a witness in suspected corruption around Israel’s purchase of three submarines from German industrial giant ThyssenKrupp.

The cases have fuelled speculation he could be forced to step down or call an early election but Netanyahu says he is innocent of any wrongdoing.

Shlomo Filber, a Netanyahu ally for more than 20 years and former director general of the communications ministry, was freed last week after agreeing to turn state’s witness in exchange for avoiding jail, police said.

He is suspected of mediating between Netanyahu and Elovitch and promoting regulatory changes worth millions to Bezeq.