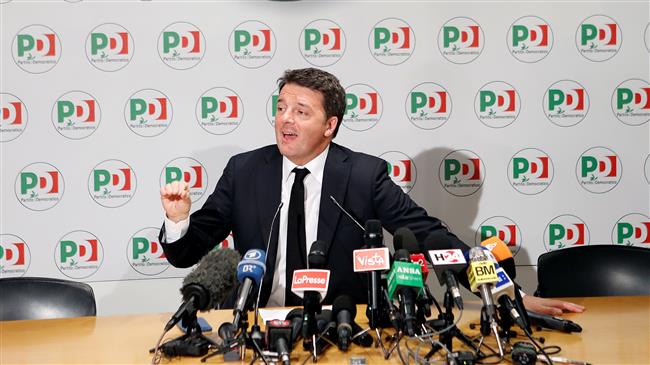 Former Italian prime minister Matteo Renzi has announced his resignation as leader of the ruling center-left Democratic Party (PD) after suffering a crushing defeat in the country’s general election.

“I will obviously step down as leader of the Democratic Party,” Renzi told reporters at PD’s headquarters in Rome on Monday, after the party obtained just under 20 percent of the vote and delivered its worst result since its creation in 2007.

Renzi also noted that his party would refrain from any coalition talks led by the anti-immigrant League Party and the Five Star.

“The Italian people have asked us to be in opposition and that is where we will go,” he said.” We will never form a government with anti-system forces.”

More than 30 million Italian people took to the polls on Sunday to cast their ballots in general election that would determine the makeup of the country’s parliament and its next government amid concerns over immigration and the economy.

Under a new law passed last year, each party needed at least 40 percent of the votes to command an overall majority of the seats in both chambers of parliament.

Exit polls showed that Italy was set for hung parliament as none of the three main parties had enough seats to govern alone.

According to reports, Italian President Sergio Mattarella is not expected to open formal coalition talks until early April.