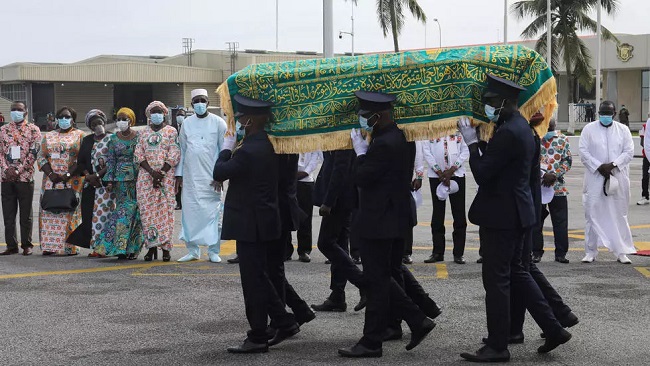 Ivory Coast’s prime minister Amadou Gon Coulibaly was buried in a private ceremony on Friday at the end of week-long national mourning triggered by a death that stunned the West African country.

He was buried in the family tomb in his home town of Korhogo, the main city in the country’s north, a source close to his family said.

Funeral prayers were said earlier in the city’s main mosque, with several hundred mourners, including Ouattara, in attendance.

Gon Coulibaly, 61, died shortly after returning from France, where he had undergone long treatment for cardiac problems.

Nicknamed the “Lion of Korhogo,” he was highly popular in the city of his birth, where he was also an MP and mayor for a long time.

“This is the funeral of a chief. We turned out in large numbers today. We had to be here, after everything that this man did for his country.”

Local people said infrastructure funds had flowed into Korhogo during his time in office.

“He tarmacked the main roads and the neighbourhoods, installed electricity throughout the city and the villages outside, gave us piped water and built schools and health centres,” said the local mayor, Lazani Coulibaly, who shares the same family name.

“He changed the face of the city — he achieved more in 10 years than people did in the previous 40.”

The ruling RHDP party is now expected to step up deliberations on how to fill the gap left by Gon Coulibaly for the presidential vote, due on October 31.

One of the world’s major coffee and cocoa producers, the country still carries the scars of a brief civil war that erupted nearly a decade ago.

In 2011, Ouattara ousted then-president Laurent Gbagbo, who refused to step down after losing elections. The months-long standoff claimed 3,000 lives.

In March, Ouattara announced to much surprise that he would not seek a third term in office, and then named Gon Coulibaly as his desired successor.

No clear successor to Gon Coulibaly has so far emerged within RHDP ranks, stoking speculation that Ouattara may change his mind.