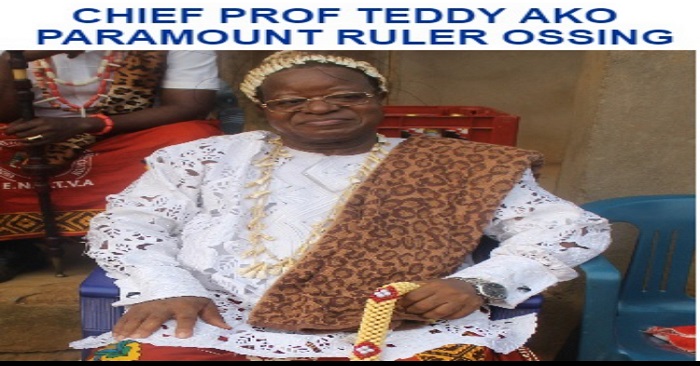 He was born AKO EDWARD OBEN on 18 May1951 in Ossing village, Eyumojock Subdivision in Manyu, Cameroon. He is of the BohAko clan of Ebarensi QuarterOssing.He is happily married with four children. He attended Basel Mission Primary School in Ossing and obtained his First School Leaving Certificate in 1963. Talking to some of his former school mates, his intelligence, honesty and dedication was evident from a very early age. He proceeded to Bilingual Grammar School, Man O’War Bay where he obtained his General Certificate of Education Ordinary Level in 1969. While in secondary school his love and dedication to reading was evident and encouraged by the teaching staff. In 1971, he obtained his General Certificate of Education Advanced LevelfromThe Cameroon College of Arts, Science and TechnologyBambili.

He obtained a BA (Hons) in English and French (Bilingual degree) from The University of Yaoundé in 1975. After his studies in the University of Yaoundé, the young AKO EDWARD wanted to test himself on the international academic stage. He travelled to the USA in 1976 and obtained an MA in 1978 in Afro-American Studies from Atlanta University, Atlanta GeorgiaU.S.A. His area of concentration was on African American, Afro-French and Caribbean Literatures.Upon completion of his MA, the young Ossingintellect elected to attain a terminal degree. He obtained a PhD in 1982 inComparativeLiterature,UniversityofIllinois, U.S.A.

While researching for his PhD from1979 to1982, he was aJunior Lecturer at the University of Illinois,USA. After completing his studies in the USA, Dr Teddy Akomade a decision to give back to his country of origin. In 1982, he returned to Cameroon and was recruited as aSenior Lecturer in the University of Yaoundé from 1982–1992.

He has served as the Technical Adviser to the Secretariat General, Presidency of the Republic of Cameroon. At the University of Yaoundé 1, Prof Ako held several academic positions amongst them; Vice Rector in charge of Research and Cooperation, Vice Rector in charge of Academic Affairs, Dean of Student Services, ChairDepartment of English and Associate Professor Department of English. In 2005, Dr Teddy Ako became Full Professor of American and Commonwealth Literatures.

Scores of outstandingly prosperous men and women excelling in their professions around the world credit Prof Teddy Ako for their foundation and accomplishments. His fortitude, decorum and educational gravity laid a foundation for many who had the fortune of sitting through his lectures and benefiting from his tutelage.To date, he has supervised more than 20 PhDs and over 40 candidates for the Master’s degree and more than 30 for the Diplômed’EtudesApprofondies (DEA) or Certificate of Advanced Studies.

Between 2008-2017, he served as the Rector, the University of Maroua, Far North Region Cameroon. Since 2017, Prof Teddy Ako is serving as the Pro-Chancellor of the University of Buea, South-West Region, Cameroon.Chief ProfAko is a member of many distinguished national and international academic organisations. He has published hundreds of articles, papers and books extensively in his area of expertise. He is fluent in English, French, Spanish, Kenyang and Keaka languages.

Following the transition of Nfor General James Tataw to the land of our ancestors in July 2019, the chieftaincy stool of Ossing village returned to Ebarensi Quarter and specifically to the BohAko clan. The decision for the elders and kingmakers was less than daunting following the résumé of Prof TeddyAko.He finds himself on his throne by clear grooming and preparation.

In choosing Prof Ako as the new chief of Ossing, the Kingmakers have demonstrated wisdom, vision and regard for village unity and progress. They have also shown that they intend to inspire a generation of Ossing progenies with someone to look up to. Their pick is a chief who can reach out to all the twelve quarters of Ossing to foster the unity, development and the progress needed in the twenty-first century. He represents an extraordinary and safe choice for the village.

Chief Ako possesses the utmostintegrity and commands respect outside his village. At a time of huge political and economic uncertainty facing the Cameroons, Chief Prof Teddy Ako is a man touse his intellectual exposure and academic blessings to tilt his people in the right direction. It is known in the village that prior to the current political turmoil; he was planning to retire to the village to spend his days with his people. Chief Ako has the ability to articulate the problems plaguing his subjects with empathy and honesty and possesses the skills to seek solutions to these problems.

His induction radiates promise to the young and old with different expectations from either group.His enthronement is crucial for the children and young people in his village who would see a man born in a village with nothing but brains and made use of his intellectual blessings to rise to the top of his profession. His enthronement is a lesson for all Ossing children to carry themselves with humility and determination. Chief Teddy Ako is not driven by primitive material accumulation and consumption and the youths of Ossing have a solid foundation to learn from.

Enthroning Chief Ako doesn’t solve all the problems of Ossing but it acknowledges that the Kingmakers were endowed and inspired to stay true to the values of justice, peace and progress. Being fluent in Kenyang and Keaka, the two languages of the bilingual village, the Chief would articulate, sympathise and empathise with his subjects without any barriers.

Given his position as the most seniorEkpeSessekou in Ossing, the kingmakers have enthroned a man who can step up when traditional matters arise. Chief Ako has not emerged by accident and must lead by being led by the aspirations of his people.

In traditional matters, the new chief has shown that he has a grasp of the facts and customs. Having worked closely with former Chief GeneralTataw and the national ODCA branch in Yaoundé, he comes in from the inside. Given his age and experience in Ekpe and community affairs, Ossing is in a good place under his leadership.

His major resources are intelligence, patience and gentleness and all ages and social groups from and within Ossing will reap ample rewards from these attributes.He must communicate a clear vision for his village and his subjects to carry them along with him.Chief Ako must demonstrate the true spirit of leadership, service and sacrifice to his people and there is no doubt he possesses that spirit in abundance.

Chief Teddy Ako must possess big dreams for Ossing and sell them to all under his Chiefdom. He has a responsibility to galvanise the Ossingelites and diaspora and inspire them with hopefulnessbuttered with reasons to build and develop their village.

Ossing has always been a model for peaceful transition of the throne in Manyu and Cameroon. We have held true to the chieftaincy foundations laid down by our ancestors and all ‘Ossingians’ must be proud of our elders and kingmakers over the last 12 months. Chief Ako has a responsibility to educate the Ossing youths and the outside world on the history of the Ossing Chiefdom and the significance of the rotational chieftaincy stool. This is profound for his legacy!

The Ossing elites and diaspora are blessed with intellect and solid financial backing. Chief Prof Teddy Ako has the internal resources to tap into them. He possesses the ability to capture the imagination of his villagers, the elites and the Ossing diaspora. Ossing is entering a golden era and he is lucky and blessed to be leading. He must be a force for change and development. He has all it takes to achieve that. His commitment to progressive values by appointing Mami Alice Nkongho as the first woman to the village council is sound, commendable and a strongsignal of what to come.

Chief Ako possess the acumen, candour and courage to weld together all of Ossing’s different fragments and families. Chief Ako’s character and credibility are impeccable. The Ossing elites and the diaspora must back up their desire for a better Ossing by rallying to support their new chief with words and actions. Ossing now has a chief who can recapture the dreams of our forefathers.

With Chief Prof Teddy Ako, Ossing can only do one thing. Win!