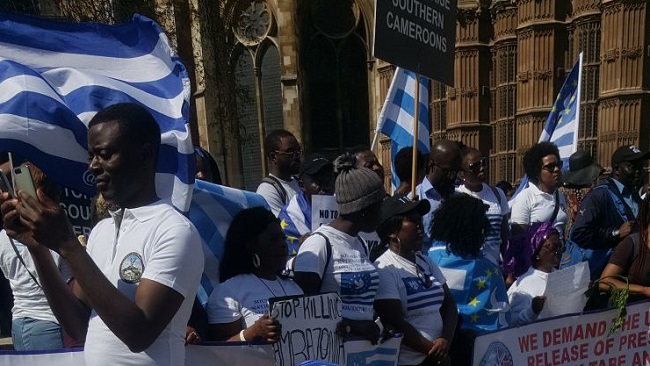 The Communication Secretary of the Federal Republic of Ambazonia, Hon. Chris Anu, today used his first appearance before Southern Cameroonians in the UK to condemn every act of terror against Ambazonian civilians by French Cameroun army soldiers.

Addressing 100s of Southern Cameroonians gathered in London for a protest march during the Commonwealth Heads of Government Meeting, Chris Anu said the world expected from the Commonwealth a clear stance and firm answers regarding the atrocities of the Biya Francophone Beti Ewondo regime as well as with regard to respect for human rights.

Addressing the Southern Cameroons public, Mr Anu called for generous donations to the struggle saying if Ambazonians get tired of giving; French Cameroun troops will eventually exterminate everyone in the territory.

Chris Anu said French Cameroun orchestrated presidential, parliamentary and municipal elections will not hold in Southern Cameroons. Earlier before the protest march, Chris Anu told the BBC that there will be no negotiations until the Interim Head of State, Sisisku Ayuk Tabe and all those arrested due to the Southern Cameroons uprising gain their freedom.

“We are still suffering from the unjust curfew, siege and killings against our people,” said Chris Anu. He also addressed the members of the Southern Cameroons UK governing body who were present in London.

Cameroon Intelligence Report understands the US and the European Union have been seeking to delay presidential elections in Cameroon due to the crisis in Southern Cameroons, in the hope of winning Ambazonian agreement to accept President Biya’s Greek Gift of a Minister of Territorial Administration and Secondary Education.