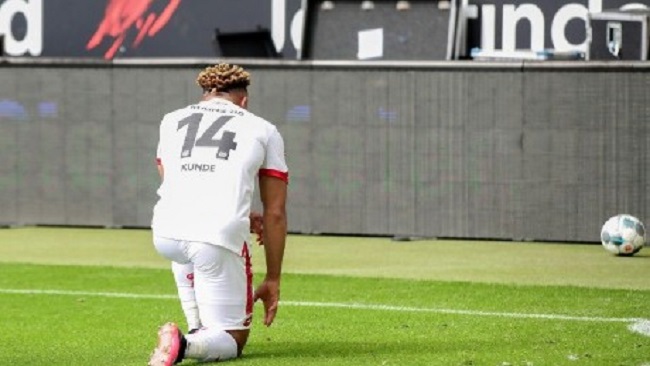 Pierre Kunde Malong on Saturday became the latest Bundesliga player to pay tribute to George Floyd when he took a knee after scoring the second goal in Mainz’s 2-0 win at Eintracht Frankfurt.

As thousands assembled in Berlin and Munich to demonstrate against police brutality and for racial equality, Mainz midfielder Kunde Malong paid tribute to Floyd, a black American man who died in Minneapolis last month while being arrested by police officers.

The Cameroonian will face no sanction from the German Football Federation (DFB) for the gesture after it gave the green light on Wednesday to players who wanted to honour Floyd or support the Black Lives Matter protests which have raged across the USA.

Borussia Dortmund players also wore messages on their T-shirts during their pre-match warm-up ahead of their clash with Hertha Berlin later on Saturday.

Jadon Sancho and Achraf Hakimi wore the messages “no justice, no peace”, while midfielders Axel Witsel and Emre Can’s T-shirts displayed the words “black”, “white” and “yellow” crossed out, with the word “human” below.

Sancho and Hakimi had avoided punishment by the DFB following their on-pitch calls for justice for Floyd last week, as German football’s governing body gave players the go-ahead to show their feelings regarding Floyd’s death and the subsequent protests.

Earlier, German champions Bayern Munich became the highest-profile club in the country to show their support the protests.

Prior to their 4-2 win at Bayer Leverkusen, players warmed up in T-shirts bearing both the Black Lives Matter hashtag and the slogan of the club’s official “Reds Against Racism” campaign.

“As players, we always have the same message: we are tolerant, we are open, we are open to the world,” Bayern captain Manuel Neuer told Sky after the game.

“FC Bayern stands for a world in which racism, discrimination, hate, injustice and violence have no place. The death of George Floyd and the images from the USA have shocked us all,” said club president Herbert Hainer in a statement.

“It’s a matter of actively and loudly showing our colours. Black Lives Matter and Reds Against Racism. We stand for togetherness that goes far beyond sports.”