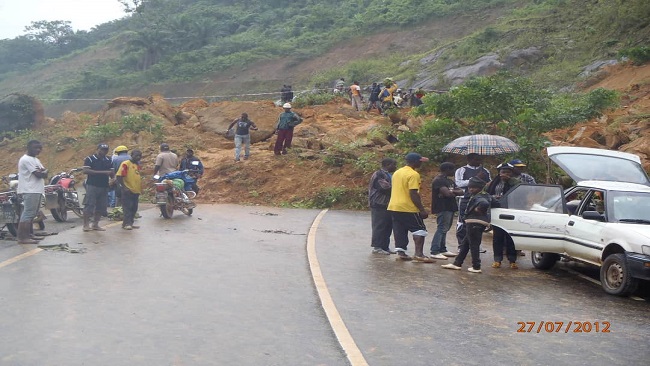 A huge landslide is disrupting transportation and business between Bamenda and Mamfe.

The road, which snakes its way through hills and valleys, was already a major concern to both transporters and passengers who were permanently in fear.

The road, which should have been a major highway, carries a huge volume of traffic because of the business that comes from Mamfe which is a major border town.

Normally, the hills were supposed to have been bombed to make the construction of that road a lot easier, but the cash-strapped Yaoundé government opted for a cheaper option that is turning out to be more costly.

Clearing the mud on the road will be a major operation and this could take weeks if not months, as the Yaoundé government will have to resort to its outdated processes to address a major emergency.

“We are in for a long nightmare. This road has just been tarred, but we have been witnessing many issues. There have been many accidents on this road because of its windy nature,” a frustrated businessman interviewed by a Cameroon Concord News Group correspondent on the site of the incident, said.

“This should be a major highway with huge flyovers, given that there are lots of businesses coming from Mamfe. The government should have thought about this decades ago before building this death trap that has killed many young business people,” he added.

“Our trucks are now stuck on the Mamfe side and we have many perishable goods in the other trucks heading to Mamfe. This is a disaster to us. Business has been slow because of the Southern Cameroons crisis, but with this incident, things will only get worse,” he regretted.

“I hope the government will act promptly. This is a government that has not got a track record in this regard. We are simply hoping that something gets done in the hours ahead,” he stressed.