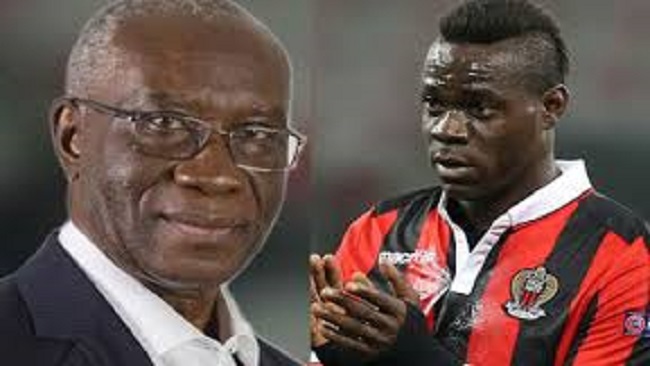 Mario Balotelli, Italy’s most famous black footballer, said on Wednesday a politician who has become the first black person elected to the Senate should be ashamed of himself for representing a fiercely anti-migrant party.

Nigerian-born Toni Iwobi moved to Italy in 1976 and joined the League in 1993, serving as a local councillor. He was elected to the upper house on Sunday to represent the northern city of Bergamo – the League’s heartland.

“Perhaps I’m blind or perhaps they haven’t yet told him that he is black. But shame on you!!!” Balotelli wrote on Instagram.

The post showed a photograph of Iwobi with League leader Matteo Salvini, both wearing T-shirts saying: “Stop the Invasion” – a reference to the party’s call for a halt to African migrants who have poured into Italy in recent years.

Balotelli was born in Sicily to Ghanaian immigrants. He has played more than 30 times for the Italian national team and plays club soccer for French side Nice.

The League has adopted an uncompromising anti-migrant stance, drawn up with the help of Iwobi, and has called for the deportation of some 600,000 immigrants, many from Africa, who have reached Italy over the past four years.

However, the party has said it supports legal migration. Iwobi came to Italy legally on a student visa and subsequently married an Italian. He went on to set up an IT company.

League leader Matteo Salvini immediately leapt to Iwobi’s defence. “I don’t like Balotelli on the field. I like him even less off it,” he tweeted.

Iwobi wrote on Facebook: “These controversies don’t interest me. There are more important things. I cannot wait to start serving my country.”

He went ahead to defend himself in an interview with Italian newspaper, Il Giornale,saying only 10% of those who flee from Nigeria are fleeing war.

“I come from Nigeria and I know how things are,” he added.

“Only 10% of those who disembark in Italy are fleeing war.The others, all the others, the vast majority, no.”

The election – which saw his party came third with 17% of the vote, a huge increase on the 4% it won in 2013 – comes at a time of heightened anti-immigrantion feeling.