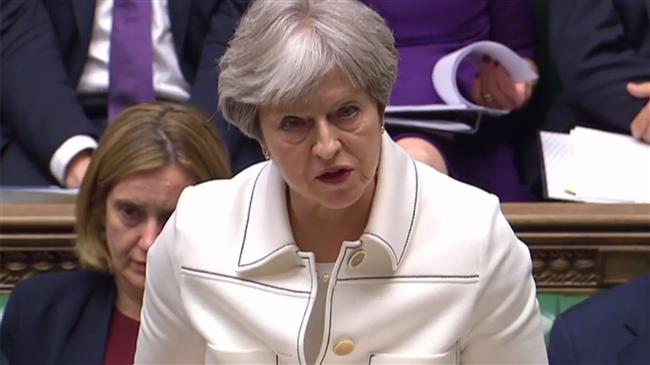 May says UK strikes on Syria were in national interest 0

The UK participated in recent attack on Syria because it was the right thing to do and because US President Donald Trump asked us to, says British Prime Minister Theresa May.

May made the remarks while addressing parliament on Monday, where she stressed that the strikes were carried out to “further prevent the use of chemical weapons.”

“We have not done this because President Trump asked us to do so,” she added.

Early on Saturday, the US, Britain and France carried out a string of airstrikes against Syria over a suspected chemical attack against Douma. Washington and its allies blamed Damascus for the suspected assault.

The Syrian government has strongly denied the allegation, calling on Organization for the Prohibition of Chemical Weapons (OPCW) to send a fact-finding mission for investigations.

‘May accountable to parliament not US’

Meanwhile, UK opposition Labour Party leader Jeremy Corbyn has reiterated his stance that British premier is “accountable to the parliament – not to the whims of the US president.”

“There is no more serious issue than the life and death matters of military action,” he added.

“It is right that parliament has the power to support or stop the government from taking planned military action,” he further noted.

“I can guarantee that Russia has not tampered with the site,” said Lavrov.

He further stressed that no chemical weapons had been used in Douma.

“I cannot be impolite with the heads of other states, but you quoted the leaders of France and the UK and US and, frankly speaking, all the evidence they quoted was based on media reports and social media,” he said.

“What did take place was the staged thing,” he added, while questioning the US,UK , and France over the timing of the strikes which were carried out before Inspectors from the OPCW even arrived in the country.

OPCW to arrive in Douma on Wednesday

Meanwhile, Russian officials have announced that the OPCW team would arrive in Douma on Wednesday.

“Tomorrow (Tuesday) the security services of the United Nations … will test the routes. And on Wednesday is when we plan the arrival of the OPCW experts,” said a senior Russian official.