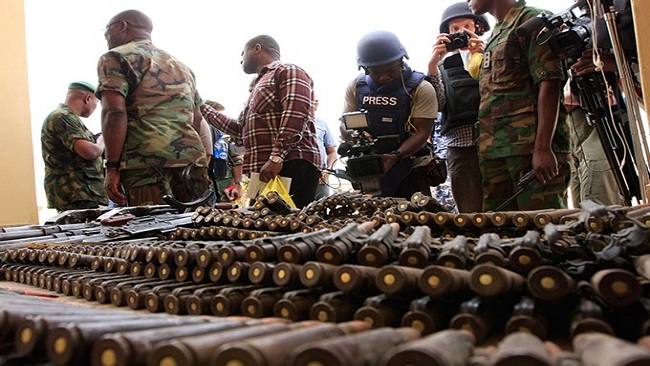 More than 100 Boko Haram and their captives, almost all Nigerians, have fled the group in the past two weeks, according to the Multinational Joint Task Force fighting the Islamist militants.

Thirty-four-year-old Nigerian Kharim Kalga is among 109 people who have surrendered to the task force since late July.

Kalga said he has not seen his two wives and five children in the two years since he joined the Islamist militant group because they kept him captive.

He said he was living in poverty when Boko Haram fighters promised to give him a motorcycle to earn money for his family, so he joined the group. He said he was forced to steal cattle and millet from villages surrounding the militant group’s camp in Nigeria. Kalga said he surrendered to the military because Boko Haram did not fulfill its promise to give him a motorcycle.

The task force is holding the former Boko Haram fighters and captives at their base in Cameroon’s northern town of Mora, near the border with Nigeria.

Among them are 45 Nigerian and three Cameroonian former fighters, 45 Nigerian children and 16 women who were being used as sex slaves.

A campaign calling for Boko Haram members to surrender and be pardoned has helped in the fight, Yusuf said.

“As professional armies, we always open this window for those who wish to come up and surrender,” he said. “You know the narrative in the Boko Haram enclave is that if you come out, soldiers will kill you, and based on the way they are being treated, the way they are being managed, they kept calling on their other colleagues to turn over themselves.”

The governments of Cameroon and Nigeria will decide whether the former Boko Haram members will remain in Cameroon or go back to Nigeria.

Meanwhile, the former militants were handed over to the Cameroon Center for Disarmament, Demobilization and Reintegration.

The Mora-based center was created in 2019 to rehabilitate 100 ex-militants at a time, but currently hosts more than 250. Center director Oumar Bichair said he needs more resources to rehabilitate the increasing numbers fleeing Boko Haram.

The government of Cameroon should provide more housing and workers, especially psychosocial caregivers, Bichair said, adding that the center also needs more workers who can train ex-fighters with skills such as farming, carpentry, and raising fish and livestock.

The Multinational Joint Task Force fighting the Islamist militants is made up of troops from Benin, Cameroon, Chad, Niger and Nigeria.

The U.N. says the decade-long conflict with Boko Haram has left 30,000 people dead and displaced more than 3 million throughout the region.