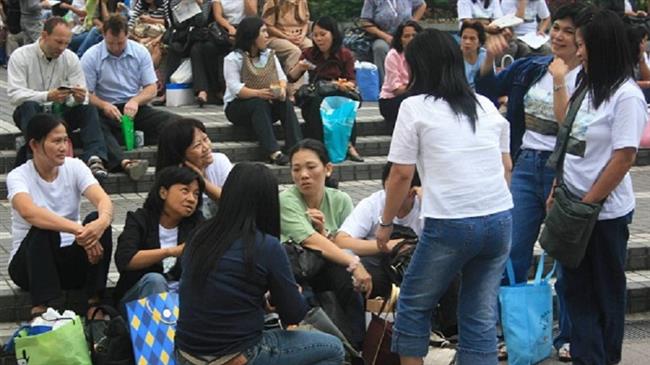 The Philippine labor minister says over 2,200 Filipinos are ready to take up an offer by President Rodrigo Duterte to repatriate workers from Kuwait amid reports of abuse.

Silvestre Bello III said on Sunday that almost 500 Filipino workers were due to arrive soon.

“We have been informed that as of Friday there were 2,200-plus Filipinos who are willing to go home,” the minister said.

He added that the government would also help repatriated workers find jobs.

“We are into a re-integration programme, we have a programme in place for them,” Bello said, adding, “They will be given a livelihood.”

“We are now in the process of looking for alternative markets. One of them is China and even Russia,” the minister said, without elaborating.

Bello said some of the Filipinos had overstayed their visas in Kuwait and applied for an amnesty.

The minister also stated that the airlines had arranged free charter flights to facilitate the repatriation.

Duterte asked Philippine Airlines and Cebu Pacific on Friday to provide flights for the Filipinos who wanted to leave Kuwait. The president has said that suspension would remain indefinitely.

A body of a Filipino worker was found in a freezer of an abandoned apartment in Kuwait recently.

Last month, the Philippines suspended sending workers to Kuwait after reports came out that abuse by employers had driven several to suicide.

Kuwait’s Deputy Foreign Minister Khaled al-Jarallah expressed “surprise and sorrow” at Duterte’s remarks in January, saying that legal proceedings had been taken in the four suicide cases mentioned by the president.

The Philippine Foreign Ministry estimates more than 250,000 Filipinos work in Kuwait, most of them as domestic helpers. There are also large numbers in the United Arab Emirates (UAE), Saudi Arabia and Qatar.

Arab monarchies of the Persian Gulf region have come under criticism by international organizations and rights groups due to mistreatment of foreign workers. Millions of poor Asians are working in the Persian Gulf states. Human rights groups say many of the workers suffer exploitation and abuse, including non-payment of wages.

Human Rights Watch and other rights organizations have also slammed mass deportations of migrant workers, which are fairly common in the kingdoms and sheikhdoms, saying they often involve physical abuse and detention in poor conditions.

Last month, a report by the Office of the UN High Commissioner for Human Rights (OHCHR) painted a grim picture of the human rights situation in the UAE, raising concern over the torture of prisoners, injustice against foreign workers and discrimination against women in the Persian Gulf state. The report argued that the justice system in the UAE is complex and impedes migrant workers and the stateless from bringing their grievances to justice.

Reports said in February 2017 that Saudi Arabia had expelled nearly 40,000 Pakistani migrant workers over the past four months.

Official statistics in Saudi Arabia indicate that 243,000 Pakistanis were expelled between 2012-2015.