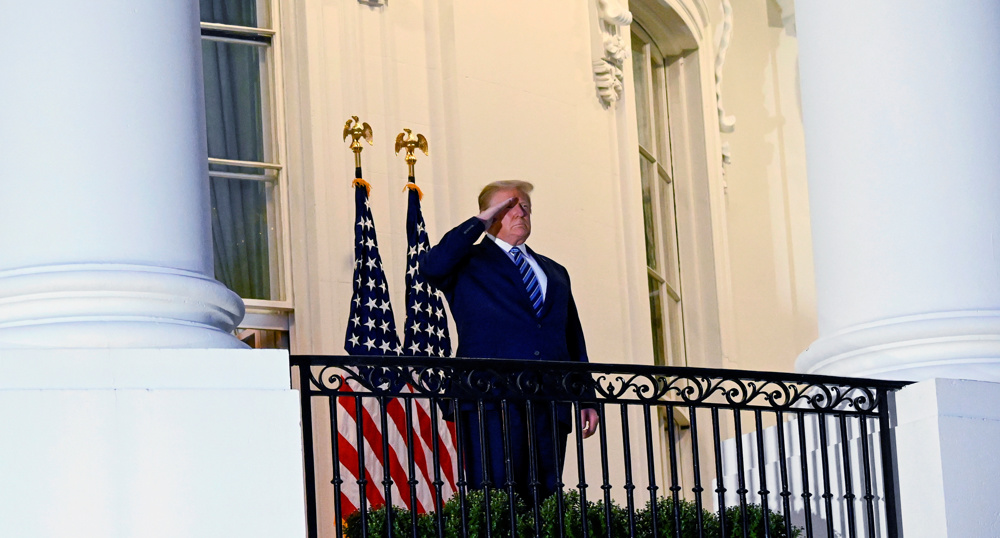 A new poll has shown that a majority of Americans want outgoing US President Donald Trump removed from office immediately.

According to a Reuters/Ipsos poll conducted after the US Capitol violence incited by Trump, fifty-seven percent of Americans want the Republican president to be immediately removed.

Trump, who encouraged a protest this week in Washington, DC that escalated into a deadly riot inside the US Capitol, ends his tern of January 20.

However, the majority of Americans who took part in the poll said they wanted Trump to leave office immediately.

Thirty percent of those interviewed said Trump should be removed using provisions in the 25th Amendment of the US Constitution, which allows the Vice President and Cabinet to remove the president if he is unfit to carry out his duties.

Another 27 percent said lawmakers should either impeach and remove Trump from office, or pressure him to simply resign.

Trump, who lost the 2020 US presidential election to Democrat President-elect Joe Biden by about seven million votes, called on his supporters on Wednesday to march on Congress, telling them at a rally that “you will never take back our country with weakness.”

About one-tenth of those participating in the poll  said they supported the the rioters and regarded them  as “concerned citizens”.

However, the vast majority, seventy-nine percent, which included both Republicans and Trump voters, described the January 6 rioters as either “criminals” or “fools.”

Seven out of 10 of the participants who had voted for Trump on November 3 were opposed to Trump’s actions in the run-up to Wednesday’s assault on on Capitol Hill on Wednesday.

The national public opinion poll was conducted on Thursday and Friday online throughout the United States and gathered responses from 1,005 American adults, including 339 who said they voted for Trump. The results have a credibility interval, a measure of precision, of 4 percentage points.

The riot, in which a police officer and four others died, has been widely condemned by both US and world leaders.

Lawmakers in both chambers and from both parties vowed on Thursday to find out how those responsible for Capitol security had allowed a violent mob to infiltrate the Capitol.

Democrats in the US House of Representatives announced a “robust” investigation into the law enforcement breakdown while introducing misconduct charges against Trump.

Two sources familiar with the matter said House Democrats could introduce misconduct charges leading to a second impeachment of Trump.

A growing number of lawmakers have expressed support for immediately stripping Trump of his powers.

Representative Adam Kinzinger, Republican of Illinois and the first Republican lawmaker to call for invoking the 25th Amendment after the riot.

Trump had “abdicated his duty to protect the American people” by inciting an “insurrection,” he insisted.

“The president has become unmoored, not just from his duty, or even his oath, but from reality itself,” Kinzinger added. “It is time to invoke the 25th Amendment and end this nightmare.”

Gov. Larry Hogan, Republican of Maryland said, “I think there’s no question that America would be better off if the president would resign or be removed from office.”

Representative Steve Stivers, Republican of Ohio, said that he also supported stripping Trump of his powers.

“The cabinet decides on the 25th Amendment, and if the cabinet decided to do that, I would not oppose it,” Stivers, a former chairman of the House Republican campaign arm, said.

“If the President does not leave office imminently and willingly, the Congress will proceed with our action,” House Speaker Nancy Pelosi said in a statement.

Pelosi threatened to pursue impeachment if the Trump cabinet did not invoke the 25th Amendment to strip the president of his powers.

One, Representative Adam Kinzinger of Illinois, said he supported the invocation of the 25th Amendment; another, Representative Steve Stivers of Ohio, said he “would not oppose” the move if cabinet members decided to proceed.

Vice President Mike Pence — who would have to lead that process — was said to oppose invoking the 25th Amendment.

The WSJ editorial board excoriated Trump for “an assault on the constitutional process of transferring power after an election” and said “this week has probably finished him as a serious political figure.”

“If Mr. Trump wants to avoid a second impeachment, his best path would be to take personal responsibility and resign,” the Journal wrote, concluding, “It is best for everyone, himself included, if he goes away quietly.”

John F. Kelly, a former chief of staff to President Trump who has criticized him on several occasions since leaving his post two years ago, said on Thursday that if he were still in the cabinet, he would vote to invoke the 25th Amendment and declare that Trump was “unable to discharge the powers and duties of his office.”

“I don’t think it’ll happen, but I think the cabinet should meet and discuss this, because the behavior yesterday and the weeks and months before that has just been outrageous from the president,” Kelly said on CNN. “And what happened on Capitol Hill yesterday is a direct result of his poisoning the minds of people with the lies and the frauds.”

Former Attorney General William P. Barr said Thursday that President Trump betrayed his office by encouraging a mob of supporters to intimidate Congress into overturning the election results by storming the Capitol.

Trump’s conduct betrayed “his office and supporters” and that “orchestrating a mob to pressure Congress is inexcusable,” said Barr.

Biden said on Friday that Trump wasn’t “fit for the job” of US President.

However, Biden refused to endorse growing calls by lawmakers to impeach Trump for a second time.

Addressing reporters in his home state of Delaware after an event introducing some of his Cabinet choices, Biden noted that a key reason he ran for president was because he’d “thought for a long, long time that President Trump wasn’t fit for the job.”

“I’ve been saying for now, well, over a year, he’s not fit to serve,” Biden said. “He’s one of the most incompetent presidents in the history of the United States of America.”

But he refused to back efforts to remove Trump from office now and said he was focused on the start of his own administration on Jan. 20.

Biden suggested that a key hurdle to removing Trump was that he has less than two weeks remaining in his term.

“If we were six months out, we should be doing everything to get him out of office. Impeaching him again, trying to evoke the 25th Amendment, whatever it took,” Biden said.

“But I am focused now on us taking control as president and vice president on the 20th and to get our agenda moving as quickly as we can,” he pointed out.

He said his top three priorities were beating back the coronavirus, distributing vaccines fairly and equitably and reviving the struggling economy.

Biden, nonetheless, admitted that Trump had “exceeded my worst notions about him. He’s been an embarrassment” and likened the “damage done to our reputation around the world.”

The US set yet another record for the number of fatalities from the coronavirus-borne illness COVID-19 and recorded the highest number of new cases since the start of the outbreak, with the latest numbers exceeding even the worst case scenario forecasts of health experts.

More than 4,000 Americans died of COVID-19 on Thursday, according to a New York Times tracker, and at least 280,292 new cases were recorded.

The US continues to lead the world by cases, at 21.7 million, or more than double the next worst tally, followed by India with 10.4 million, and by deaths, at 366,664, according to data aggregated by Johns Hopkins University. With 4% of the world’s population, the U.S. accounts for about 20% of reported fatalities.