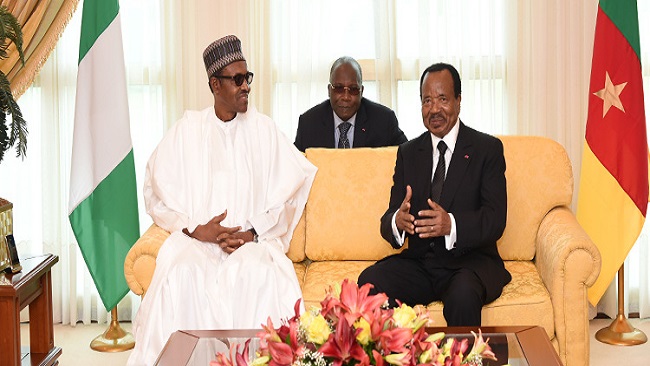 Cameroon Concord News Group strongly advocates the formation of “The 5th of January Movement” in Nigeria to condemn the abduction, that day, of of Ambazonia leaders in Abuja, Nigeria. The consequences of not holding the perpetrator of the crimes accountable for their conduct will be that, their criminal conduct will embolden criminal gangs in Nigeria and elsewhere in Africa to legitimize terrorism warfare as a legitimate means of settling problems of an economic and political nature. Abduction for ransom is already a critical law problem in Nigeria and French Cameroun. Although formally outlawed in Nigeria, it is official government policy in French Cameroun. Over a period of fifty-six years, French Cameroun gendarmes and other security operatives ransom Southern Cameroonians for huge bribes to regain their Freedom. The majority poor without money perish in concentration camps and inhuman dungeons at the pleasure of colonial administrators of French Cameroun. The war against Boko Haram provided French Cameroun Government officials the opportunity to arrange the abduction of foreigners with their supposed Boko Haram partners in exchange for huge ransom money which they partition among themselves. The success of this business inspired the abduction of Southern Cameroons leaders for money.

History will retain that on the 5th of January 2018, Nigeria formally endorsed terrorism warfare by abducting the President of the Southern Cameroons/Ambazonia and members of the Interim Government of the Federal Republic of Ambazonia who were legally in Nigeria under the protection of International Law. Nigeria has been widely condemned for resorting to this criminal conduct in abducting the Ambazonia leaders. They were wards of international law. By relying on terrorist means to abduct and disappear them, Nigeria committed crimes against the international rule law, and the international peace and security value system which is jealously guarded and protected by the collective conscience of humanity. These values are protected by the international multilateral treaty regime and Rome Statute which Nigeria subscribed to and become a state party to.

By becoming an associate of the regime of terror in French Cameroun that has terrorized, disappeared and massacred hundreds of thousands of colonized Southern Cameroonians over a period of fifty-six years, Nigeria has willfully transformed its national territory and the Gulf of Guinea into a terrorist paradise at the service of criminal bands holding on to political power through corruption and other criminal means in both countries.  This new strategy of terrorism warfare aimed at abducting, killing and disappearing civilian leaders for political and economic benefits will surely be emulated and applied with great efficiency within the sub region and beyond.  The pecuniary motivations for the abductions, the use of terrorism warfare to carry out the operation in attempts to evade the scrutiny of legitimate government security and intelligence operatives, points to the existence of parallel command structures outside the constitutional structures of supposed civilian democratic governance.

The abduction of Southern Cameroons leaders in Abuja on the 5th of January 2018 must therefore elicit an appropriate response from rule of law activists worldwide.  A 5th January Movement will mobilize Nigerians and people of good will worldwide to mount a sustained campaign against the new criminal system of terrorism warfare that was launched by Nigeria and French Cameroun in Abuja through the abduction and disappearance of Ambazonia leaders. This is not just an Ambazonia problem. It is a problem of humanity at large. If nothing is done then a few months from now, several civilian leaders in all walks of life, in commerce and industry, in politics, religion, civil administration etc will become legitimate targets of abductions for all manner of political and pecuniary interest.  Nigeria must therefore be forced to produce and release Ambazonia leaders forthwith.

Ambazonia has far in the exercise of its legitimate right of self defense not targeted civilians or persons not taking part in the international armed conflict between it and its neighbouring country French Cameroun.  If Nigeria is not pressurized to release Ambazonia leaders and French Cameroun forced by the International Community to release and Ambazonians held it captivity, then Ambazonia may be forced to employ a tit for tat war policy against hundreds of French Cameroun’s proconsuls within its national territory.  Ambazonia has already ordered them to leave the Federal Republic of Ambazonia immediately. Neither French Cameroun nor Nigeria gave Ambazonia leaders this option; they cowardly abducted them in a criminal corruption scheme unprecedented in Nigerian history.  History of human power has a life span. For this reason, Babagana Mohammed Mungano a key actor in this criminal scheme will sooner or later provide a public account of what transpired while the Ambazonia train of freedom will continue to race towards its final destination un hampered even by this criminal act.