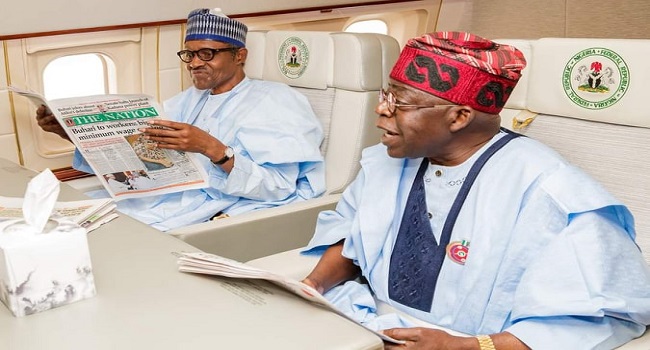 Nigeria: Buhari, Tinubu, and the Macbeth in us all 0

Ifa’s revelation is always in parables; only the wise can understand their meanings.

In his analysis of the Shakespearean Tragedy “Macbeth” Michael Stratford argues that the essence of human pride was covered in three dimensions by this work. He asserted in supports of the works of Majorie Garber on the play which concluded that Macbeth’s confrontation with morality at the end of the play portrayed “real recovery” and completed the depiction of the phases of pride in men. He went further to outline these stages as: The hubris that hurls a man into sin and error, the false pride that secure and justifies all and perpetuates us in evil acts, and the final realization of our immortality and futility of all things.

The play Macbeth has been analyzed by many due to its relevance in everyday human progression. Macbeth was a young and virile soldier honored for his love of Scotland and bravery at war by King Duncan. He was at the zenith of his profession as a soldier and revered titled gentleman in Scotland when the story started. A chance meeting with the “three witches”, their predictions of Macbeth as the King of Scotland, transported this gentleman into a murderer, a wicked usurper and finally, his death.

Given the level of public exposure to education against current public discourse about the rulers in Nigeria which pulls towards a group suspected of inadequacies in formal education, maybe this narrative could be brought home. Recent curiosity made me look into the Ifa esoteric  and cosmogony and I was amazed at the level of sophistication of the Odu Ifa in explaining and predicting main pattern of human conscious, and unconscious acts; going even further to reveal the purpose and destinies of humans on earth. I was further impressed by the manner with which knowledge and wisdom for managing pride and power were expressively itemized thorough the use of parables.

For noninitiates, the Ifa divinity comprises of sixteen major quadrant of ancient Yoruba Ifa cult, which was subdivided into 256 distinct sub-heads detailing all areas of human: wisdom for proper interrelations, truth and moralities, science, cosmology, metaphysics, medicine and other established norms of the Yoruba People of Southwest Nigeria as established by Orunmila. Orunmila the first Ifa priest was reputed to have started the accumulation of this knowledge base, handing it over to his sixteen children, who continued to practice and develop the Ifa practice.

The Odi Isa, noted amongst the Odu Ifa tried to balance power and pride; it depicts the travail of the Tiger, the king of the jungle when the entire animal challenged him to battle. The tiger despite his overwhelming power, applied wisdom and appealed to the elders for help. The elders asked the Tiger to perform a sacrifice and in respect to the words of the elders, the Tiger performed all necessary rites. And to this day, no animal was able to conquer the tiger.

Tiger’s power though vast and reputed never for once doubted that the whole animal kingdom could overrun him and take over his kingdom. When faced with adversities, he went begging the elders for advice. Instead of ruin and death as in Macbeth case, the tiger excel and its kingdom expanded.

Many writers in the pre-2015 era had lauded the achievements of the new progressives led by General Mohamadu Buhari and Senator Bola Ahmed Tinubu. The duo in conjunction with other heavy weights in Nigerian politics had performed the first presidential election upset in Nigerian history; the defeat of a sitting president in a general election. The global press was agog in the spirit of the wave of change coming to Nigeria politics. The emergence of Buhari as the new government leader was heralded as a milestone in Nigerian political arena.

Given sixteen years politicking before his emergence as the president, people were thoroughly misled that the “Buhari presidential dream” was driven by passionate goals for real change, when the new government started showing signs of unpreparedness to rule and obvious lack of cohesion in policy in its first few years in office. Nigerian people still believed and attributed this to huge challenges emanating from long period of institutionalized corruption by previous governments. Nigerian new government was later revealed to have been distracted by huge amount of propaganda, vain retribution, illegal and unnecessary arrests and prosecutions in its first year in power. Apparently, governance and economy finally start to show negative growth. Before the end of the second year, the country which was previously reputed as one of the ten growing global economies was in recession.

Economic indicator aside, the failing security architecture has been witnessed in all theaters of operation. Conflict escalations in most areas were being witnessed. Internally Displaced Persons (IDP) continued to rise as repetitive conflicts engulfs the state. Youth and elites migration have more than doubled within three years, and statistics on youth unemployment is reading above one third of population. The national currency’s value in international trade fell by over 200 percent in the first year of this government and it took direct intervention of the Central Bank of Nigeria to shore up the Naira to its current 360 to one dollar status. Failed economy, repetitive conflicts, insurrections, low school attendance, thriving illicit economies, and high youth emigration, according to Mary Kaldor are signs of failing states.

The constant stay outside the country by the president was a minor issue until the whole world was treated to the caricature of Nigerian President’s show of shame in faraway Poland on the Saturday Night Show recently. The lack of grace and charisma that goes with the esteemed office of the president of Federal Republic of Nigeria, the representative of over 200millon people, and  one of the fastest growing states globally by apparent lack of charisma displayed by the president and his minders. Most posits that the posture reflects apparent lack of understanding of the power and privileges garnered over the years by the Nigerian State in global politics.

Tinubu rise to stardom in Nigerian politics was midwifed by the NADECO movement against military rule in the late eighties and early nineties. The movement which led to the emergence of this ongoing republic equally blessed BAT with the governorship of the most priced state in Nigeria, Lagos. Lagos represents the hub of commerce and economy of Nigeria controlling over 25% of Nigeria economy and the claim of Nigeria as the giant in Africa business resides in the economic performance of Lagos State. Eight years direct rule, twelve years of his protégés ruling, characterized by unashamed plundering of Lagos state’s resources has created a new  “Czar” in Lagos. Bola Ahmed Tinubu, the political czar of Southwest Nigeria was born.

By 2014, Tinubu had in his control a war-chest big enough to start and prosecute any political war in Nigeria against any opposition. When Tinubu pitched his tent against President Goodluck Jonathan. He midwifed an impossible coalition of unlike minds from several parties to form the All Peoples’ Congress (APC)  in supports of Buhari. The die was cast, Tinubu’s prowess and political machinery was founded on the Lagos State dynasty. This base he has always controlled since 1999. Experts have posited that the loss of Lagos by the Tinubu gang will surely sound the kernel of his political demise.

Recent happenings have shown the arrival of the new Tinubu. Four month to the 2019 general elections, Tinubu unilaterally influenced the removal of the name of the incumbent governor of Lagos State from the ballot and imposed a new man as the party representative. A move that reportedly irked some locals and party faithful. Obviously, Tinubu’s power as sole godfather and power broker in Lagos politics was on test during the 2019 February elections looms.

Buhari’s reign and reelections as president was supported by the Tinubu’s camp. The alliance many agreed was based on the pact to return Tinubu as president in 2023. This ambition has fueled the unalloyed support from Lagos APC for Buhari’s return. It’s a big gamble on the path of Tinubu and Buhari. Like the proverbial fly, Buhari has tasted the wine and is ready and willing to die in the same cup of wine. Tinubu ambition might also turn him to the fly that refused to heed the warnings of the elders and has decided to follow the corpse into the earth.

Ambition is necessary to achieve and progress in life, yet ambitions should be ethically based, no normal leader will continue to aspire to hold and office in which he does not have capacity for managing, and no normal human being will sacrifice the future of his people, merely for his sole selfish ambition.

Ambition contaminated by acute pride surely begets disaster. Macbeth ambition was fueled by greed and selfish ambition to rule Scotland, never because he was a pushed by a need to work out a better society for his people. His endgame led to war and carnage pushing Scotland which was growing as a nation into complete recession and pillage by ravaging armies.

Tinubu contesting the presidential elections in 2023, might be met with high resistance by Lagos and the people of Western Nigeria, given current apathy and political inequalities current leaders have imposed on the public. Unlike, the Tiger, Tinubu might probably resort to the use of might against his enemies with the Federal might behind him,  but he should remember Macbeth, won the seat of King of Scotland but lost the heart of its homeland to civil wars and marauders.

Wisdom and respect for the animals led the Tiger to the elders. Tinubu and Buhari have achieved the impossible in Nigerian politics; plundered its commonwealth shamelessly, many would say; “the time has come for them to both respect the people and leave the scene for others in 2023”. But if they refuse, remind them of Macbeth: Unrestrained pride and ambition, the elders say always lead to death and destruction.

By Don Michael Adeniji is a Contributing Editor for Cameroon Concord News Group and an expert in Terrorism, International Crime and Global Security