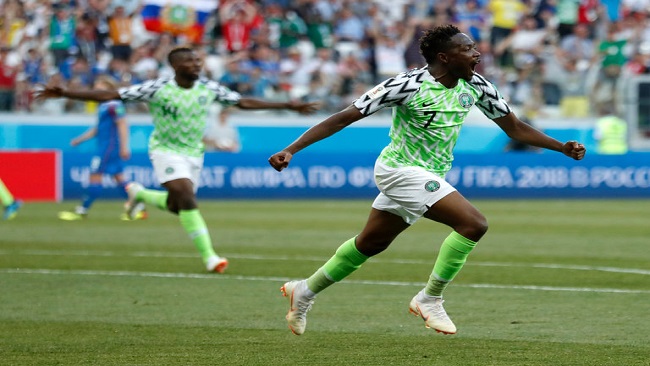 Nigeria reinvigorated its World Cup campaign — and gave a boost to Argentina’s — with a 2-0 victory over Iceland in Volgograd on Friday. Ahmed Musa had both goals. Nigeria looked sluggish in its opening loss to Croatia, and started slowly in this game too. Iceland had the better of the first half, getting six shots to Nigeria’s zero. But Nigeria stuck with its patient passing game, and it paid off in a far superior second half.

In the 49th minute, Victor Moses raced down the sideline and sent a cross into the box for Ahmed Musa. He controlled it nicely with his first touch, then used his second to slam it home.

Musa nearly got a second when his shot caromed off the top bar. Then a moment later, in the 75th minute, he latched onto a long ball, beat a defender and then the keeper, and poked the ball into an unguarded net.

“I have to thank my teammates and the coach who believed in me,” Musa said after the match. “We have to focus on the last game because that’s more important than today’s win.”

With eight minutes to go, Iceland seemed to have earned a chance to close the gap. When Alfred Finnbogason of Iceland was brought down with a whack on the calf from behind, there was initially no call. But a video review determined that it was a penalty.

Gylfi Sigurdsson was elected to take it, and he aimed for the top corner. But it sailed comfortably over the bar, ending Iceland’s hopes.

Croatia is now safely through to the next round from Group D. But the second spot is up for grabs.

Some of the happiest viewers of Friday’s game had to be the Argentine team. Had Iceland won, it would have been in a terrible spot to advance. Now it has a chance.

Argentina must beat Nigeria on Tuesday to be in position to advance. And even then, Iceland could sneak into the final spot on goal difference with a win over Croatia.

Nigeria can advance with a win over Argentina. If it draws, it could still go through, though Iceland can theoretically take its spot if it beats Croatia soundly enough.

Musa is familiar with Lionel Messi and Argentina. His two previous World Cup goals at the 2014 tournament in Brazil were in a group match against Argentina.