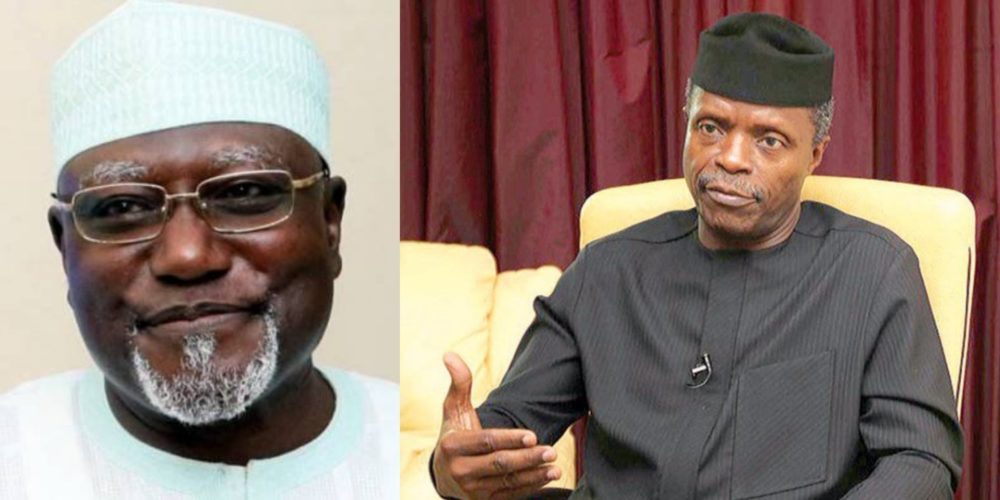 The dismissal of the DSS chief Lawal Musa Daura by the Acting President of Nigeria calculated to coincide with the absence of Muhammadu Buhari who is away in London may be music only to the ears of those who do not know how crime syndicates hide their paths.  Like his close associate Paul Biya of French Cameroun, Muhammadu Buhari on coming to power,  evince every effort to destroy the constitutional foundation of Nigeria democracy by deploying Lawal Musa Daura to abduct judges at night, to bribe or coerce gullible members of the election commission to doctor election results in favour of his acolytes, to deconstruct the economic baseline of Nigeria which previous administrations, though inept and corrupt in some regards placed the Federation on the path of sound economic growth;  and by transforming the war against terrorism into a cash cow for corrupt generals from his ethnic origin.

More than any government since Abacha, he disobeyed court orders, trampled on the rule of law and legitimized abductions for ransom or commercial abductions like that of the President of the Federal Republic of Ambazonia Sisiku Ayuk Tabe and members of cabinet who were in Nigeria under the protection of United Nations High Commission for Refugees. This commercial abduction guaranteed Buhari election campaign money from French Cameroun and France through its embassy in Abuja, Nigeria.  The execution of these crimes was perpetrated by DSS led by Lawal Musa Daura on the direct instructions of Buhari.

His dismissal with immediate effect for deploying masked operatives of the DSS to bar entry into the National Assembly of members of that constitutional arm of the government is not the first time such blatant violation of the constitution with impunity was carried out by the DSS and Nigerian intelligence services under the orders of Muhammadu Buhari. During his current mandate, DSS has interfered with the functions of the Police and the administration of justice. Buhari imposed a reign of terror equal only to that in his first term and that of Abacha combined, using the DSS and Lawal Musa Daura. Through his national security adviser, retired General Babagana Mugano and his clan’s men, Buhari bypassed the Minister of Defence, the Minister of Foreign Affairs and the Attorney-General to organize and execute a corrupt commercial abduction deal with Paul Biya that was facilitated by the French Ambassador in Abuja on behalf of his government. That deal led to Southern Cameroons-Ambazonia leaders who were in the protection of the United Nations High Commission for Refugees being illegally sent back to French Cameroun where they risk death sentences in a court-martial. They have since been detained under inhuman conditions and denied access to lawyers of their choice.

Prior to this corrupt deal, Mr Buhari who promised serving one term prior to being elected, was cash strapped to venture to break his election pledge to his party and to the people of Nigeria. Once the commercial abduction deal was sealed and delivered, he announced his intention to run despite strong opposition from his party and most Nigerians who believed he had run the economy aground; is vindictive and nit-witted in modern governance.  The steady desertion of his party by Nigeria political power-horses has dimmed his chances of surviving a gruesome election in 2019.

To stifle the criticism that he is a dictator, a treasonable violator of the constitution, and an economic and security risk to the nation, he instructed from his London sojourn Babagana Mugano to order Lawal Musa Daura to attack the very symbol of Nigerian popular sovereignty, the peoples’ parliament.  This action is indeed a treasonable felony for which Buhari needed to be impeached and removed from power.

Unfortunately for poor Lawal Musa Daura, due to his overzeal and the trappings of corruption he benefitted from his brutal violations and impunity, he did not know that this time around, he was being framed to whitewash the badly tarnished conduct of Buhari and his presidential record.  The intended result was to make a case to Nigerian voters that the whitlow that was afflicting the fabric of constitutionalism has been excised.  Be not be fooled, Nigerians.  The hangman of the Buhari dictatorship has simply been sacrificed and may soon find his place among his many victims in jail, if they are lucky to still be alive.

In relation to the criminal partnership that enjoined Buhari and Paul Biya to sign a pact to exterminate the people of the   Southern Cameroon-Ambazonia, the intention was to protect French oil and natural resources economy in the territory.  Cameroon Concord News Group previously provided details of the corrupt deal which make a mockery of Buhari’s purported fight against corruption. The fear of his predictable free fall from power in Nigeria and the eminent end on the weight of the Ambazonia war of the most ruthless crime mastermind in Africa, Paul Biya of French Cameroun, has forced both dictators to attempt the cover-up of their criminal tracks by sacrificing the most ruthless executioners of their criminal plans.  It was obvious even to the jaundiced eye that the bloodletting caused by the terrorists of French Cameroun with the support of Buhari on the civilian population of Southern Cameroons- Ambazonia had the official seal of criminals in power in Nigeria and French Cameroun.  Cameroon Concord News Group alerted the world to the criminal activities of this criminal minded leaders several times in the past.

In its investigative reports, Cameroon Concord News Group revealed that Paul Biya of French Cameroun and the French intelligence operatives present in the French Embassy in Abuja bribed the government of Muhammadu Buhuri a significant of money for the abduction and rendition of the President and cabinet members of the interim Government of the Federal Republic of Ambazonia from Nigeria to Cameroun.  French Cameroun and Nigeria have no extradition treaty.  In that occasion, on the instructions of Muhammadu Buhari and Vice President Yemi Osinbajo, the Defence Adviser to Buhari, Babagana Mugano ordered the Director of the State Security Service (DSS) Lawal Musa Duara to proceed with hitmen from the Special Operations Unit in the Presidency of French Cameroun to abduct Sisiku Ayuk Tabe and members of his cabinet from Nera Hotel in Abuja. Their original objective was to kill the abductees but for the early frightful alarm raised by one of the double agents who were operating proximate to or from within the interim government.

These double agents have since refused to cooperate and provide information to an expert panel of investigators retained by the Interim Government of Ambazonia and the Ambazonia Criminal Investigation Services. Nevertheless, Cameroon Concord News Group can authoritatively disclose that very highly incriminating evidence has been recovered by the Investigators of the Interim Government from some Nigerian Intelligence services, and some foreign intelligence services outside of Africa. This evidence is so compelling that it will nail all the co-conspirators when the verdict of time dictates. That time is not far from now.

With this foreknowledge, Cameroon Concord News Group joins millions of Ambazonians to urge the Interim Government of Ambazonia not to attend the so-called Collaborative Conference in Canada called or organized to destroy the Ambazonia Revolution at a moment the freedom quest is intensifying and attracting world attention. There are no security guarantees from the Canadian Government that our Acting President and his cabinet members will be provided governmental protection. Furthermore, there exists a legal- cooperation agreement between French Cameroun and Canada unlike the USA.   Our leaders are safe in the USA but that may not be the case in countries which have legal cooperation agreements with French Cameroun.

Cameroun Concord News Group has previously revealed details of the scheming within the Nigerian and French Cameroon Security operatives to abduct or assassinate members of our Interim Government. Atanga Nji lately boasted that the plane that brought Sisiku Ayuk Tabe and members of his cabinet will bring some of our leaders to French Cameroun. Going by his criminal credentials, this must not be taken lightly. He is still the Secretary-General of the National Security Council overseeing shoddy criminal deals including abductions and assassinations.  The Interim Government must therefore check for governments that have legal cooperation agreements with French Cameroun. It must investigate the commitment of those governments to constitutional guarantees that occur in the US prior to falling into the traps set with the complicity of some among us.

Although a near illiterate, Atanga Nji an overseer of the underground Special Operations Unit in the Presidency of French Cameroun, is a ruthless assassin and abductor. He was intimately involved in the abductions of Captain Guerandi Mbaya and Sisiku Ayuk Tabe and his cabinet. The Special Operations Unit of the Biya crime syndicate is responsible for the abduction and murder of members of the clergy, arranged accidents, poisoning and enforced disappearances.

Since Cameroon Cconcord News Group exposed the details of the commercial abduction deal signed by Buhari and Paul Biya that has led to the abduction of hundreds of Southern Cameroons-Ambazonia refugees from Nigeria to French Cameroun, the purge of the executioners of the criminal commercial abductions and other crimes has indeed commenced in earnest. In French Cameroun, Martin Belinga was pushed further into the shadows.  He occupies himself more with overseeing the mystical governance of the crime syndicate. That makes him even more influential and more powerful.  The passion in assassinating clergy men who had previously benefited from his evil blood money largesse and bringing in grand masters to control the soul of gullible within the CPDM and to claim the nation for Paul Biya bears his hallmark from the shadows.   Rene Sadi was brought to the shadows to help jumpstart the memory of the demented and wasted Al Capone of French Cameroun politics Paul Biya.  Laurent Esso, Fame Ndongo, the Minister of Defense, Beti Assomo and a plethora of genocide ideologues that include Issa Tchiroma, Owona Nguini and the recently recruited and initiated Jean De Dieu Momo, Atanga Nji, George Tabe Tando, and an elaborate network of civil and military co-conspirators are overseeing the effective execution of the genocide, crimes against humanity and war crimes.  Atanga Nji possesses the overzealous ability of Lawal Musa Daura to be sacrificed son soon by Paul Biya the same way his crime acolyte Buhari has done with Lawal Musa Daura.

Cameroon Concord News Group is confident that with the sacrifice of Lawal Musa  Daura who may soon be held to account for the commercial abductions of Sisiku Ayuk Tabe and other Southern Cameroons leaders and citizens, Buhari will again explain to the international community that he was not aware of the criminal acts of his DSS director, the fact that his national security adviser Babagana Mugano confessed to his role in the crime notwithstanding.   That reader is the world of shoddy politics where the overzealous crime executioners almost always pay the supreme price for their own buffoonery and turpitude.  As Lawal Musa Daura meditates his fate, let Atanga Nji and the others start marking time for the day of reckoning, and ultimate sacrifice by the very vampire that they fed with the blood of the innocent, the weak and the helpless.