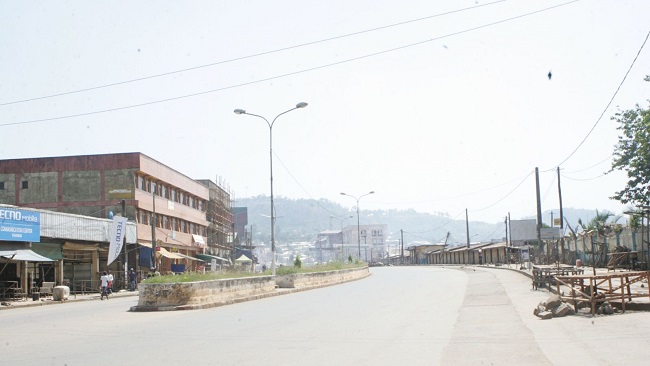 The economy of the troubled English-speaking regions in northwest and southwest Cameroon is slowly grinding to near halt as the long-drawn out security crisis is forcing local businessmen to put their safety over commerce. It is also driving away many of the biggest traders originally from neighboring Nigeria who have traditionally run key markets in towns around the regions.

The crisis, which started as a modest industrial strike action by English-speaking lawyers and teachers against the imposition of French, has spiraled into an unprecedented internal armed conflict. There are fears the country could slide into civil war as the conflict persists. In recent months, frequent clashes between government forces and separatists seeking to establish a state they would call ‘Ambazonia’ has left scores of civilians dead, including women and children.

The recurrent deadly confrontations have provoked mass movement of people. The UN Office for the Coordination of Humanitarian Affairs estimates that no fewer than 160,000 people have been internally displaced, while a further over 21,000 have crossed to next door Nigeria as refugees.

In a bid to express dissent activists have instituted a civil disobedience action called “ghost town”; which grounds daily activities every Monday, with extensions to some other key days. Traders who spoke to Quartz see the operation as economically damaging as at least one full business day is lost each week since late 2016. Those who dare defy the order risk facing the wrath of unknown arsonists who have burned down shops in nearby towns.

Restrictions of the movement of people and goods have further worsened the already deteriorating situation for businessmen. Armed secessionists called “Amba Boys” mount intermittent road blocks on-and-off along major highways in the troubled area. The government has also had to officially close its western borders with Nigeria on at least two occasions, while dusk to dawn curfews instituted by some local administrative authorities have simply helped to worsen the precarious situation.

The conflict has also been marked by the disruption of essential utility services, especially the supply of electricity and network interruptions to telecommunication services. Internet services were cut off for 136 days between October 2017 and February this year.

Kumba, the economic hub of the South West region, located some 70 kilometers from the city of Buea, has a sizable Nigerian business community who are principally engaged in trade; selling motor spare parts, liquor, electronics, fabrics, cosmetic products, among others. Like in Nigeria itself, many of the traders are of the Igbo ethnic group and their neighborhood in Kumba is named “Igbo Quarter”.

Igbo traders are a fixture in markets across western Africa and beyond with key networks at home and even out to China, a primary source of many goods they sell. Most of the Nigerian traders in Kumba have been doing business in the town in the last two decades. But many are now considering leaving for both safety and business reasons. Similar to Cameroon, some ethnic Igbo political activists have over the last two years been reviving a call for the separate Biafra state to be carved out of Nigeria’s eastern region close to Cameroon. When this happened in earnest 51 years it sparked the Nigerian civil war which eventually led to the loss of well over a million lives.

Many Nigerian traders are not keen to wait to find out if the Cameroonian troubles eventually subside.

Fabric traders, Mr & Mrs Okezie, are preparing to return to their hometown in Abia state in Nigeria. The husband says it has been difficult to get supplies from Nigeria over the last three months, while the whereabouts of most of their customers who took wares on credit are unknown. “Like some of our other brothers, we just have to return home and see what life has to offer there,” he said. “Things are really tough here now and we see no way forward.”

Another Nigerian businessman who asked not to be named given the security uncertainty, said “the business environment has become extremely hostile.” He said sales had dropped off and he no longer felt safe being in Kumba. “On at least two occasions, Amba Boys have visited me requesting for groundnuts [cartridges for Dane guns] or money to support the struggle.

Kevin Ndubuisi, president of the over 250-man strong Imo State Union in Kumba says his Nigerian compatriots have been returning in their numbers. “But no one tells you when he is returning. Some have just gone back as though they were going for a business trip but never returned.”